The famous bendgate videos and memes may just start doing the rounds of the Internet again, and this time it’s not Apple and its new larger iPhone models that are the butt of the joke. SquareTrade, an extended warranty service provider for consumer electronics, has come out with a video showing the Samsung Galaxy S6 Edge being put through a bend test alongside the iPhone 6 Plus and HTC One M9. 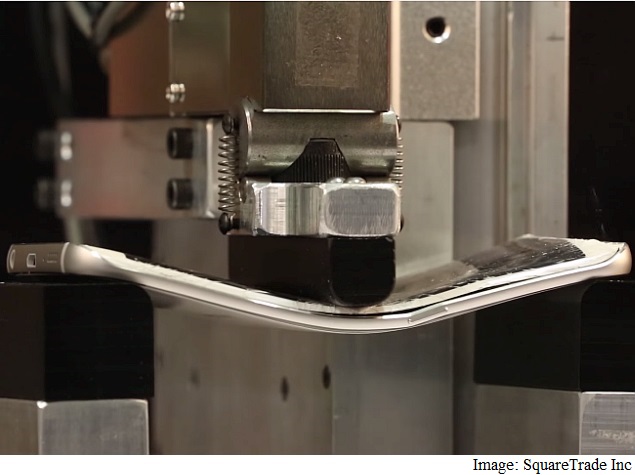 The video shows that the Galaxy S6 Edge bends as much iPhone 6 Plus; though the former’s screen broke due to excessive pressure applied, something that was not reported for the Apple’s biggest iPhone last year. The approximately 2-minute video also shows the HTC’s new flagship put under bend test.

Square Trade used “BendBots” for applying pressure on the handsets under tests, a method that detects how much bending and breaking a smartphone can handle. It is claimed to simulate forces similar to sitting – the most common bending scenario.

In case of Apple’s iPhone 6 Plus, it all started user complaining that the phone was bending in their pockets while sitting.

Soon after YouTube videos thrived, showing other flagships put under similar bend tests to see whether they will bend similar to iPhone 6 Plus.

It’s worth mentioning that after the report about iPhone 6 Plus bending landed on the Internet, Samsung was one of the first companies to take pot shots at Apple with viral memes. Apple later defended the build quality and testing method of both the iPhone 6 and iPhone 6 Plus, taking media on a tour of its testing facility.