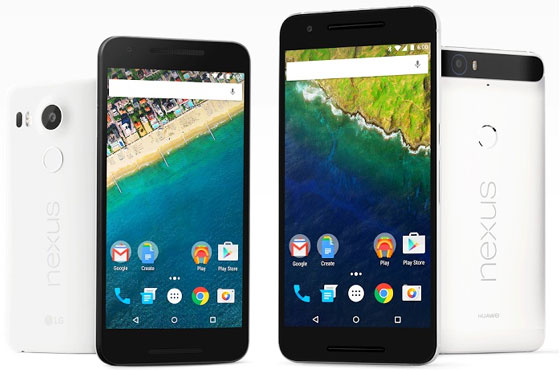 David Burke, VP Engineering (Android) at Google, introduced the new Nexus lineup, saying the range represented the “latest Android software built into the most innovative hardware”, meant to deliver “Android as Google designed it.” They will be available via the Google Store, with the Nexus 5X priced starting from $379 for the 16GB model, and the Nexus 6P priced starting from $499 for the 32GB model. Both devices go up for pre-order on Tuesday in Germany, Ireland, Japan, the UK, and the US. They will start shipping from later in October. India pricing for the Nexus 5X and Nexus 6P has also been announced, but there’s no word yet on the availability of the phones.

Both the Nexus 6P and Nexus 5X are the platform lead devices for Android 6.0 Marshmallow, and feature specific hardware to power the natively supported features, like the Nexus Imprint fingerprint sensor, and USB Type-C ports. Both phones are also compatible with Google’s Project Fi, the company’s MVNO service. The fingerprint sensor is claimed to recognise a print in less than 600 milliseconds. Also on board the new Nexus smartphones is the Android Sensor Hub, a low-power processor similar to the M9 coprocessor by Apple, which separately powers gesture, activity, and movement tracking using gleaned from specialised hardware including the camera. The hub will also power features such as glance notifications, shown when the user picks up the phone.

Both phones will ship with a 90-day free subscription to Google Play Music All Access, and get $50 of Google Play Credit. The new Nexus smartphones also come with an extended warranty scheme that’s valid for 2 years and covers mechanical breakdown apart from accidental damage. It is priced at $69 and $89 for the Nexus 5X and Nexus 6P respectively.

The Nexus 6P is the first full-metal smartphone, built out of aluminium, and features a 5.7-inch QHD (1440×2560 pixel) display with Corning Gorilla Glass 4; a 12.3-megapixel rear camera with 4K and slow-motion (240fps) video recording, apart from an f/2.0 aperture; 8-megapixel front-facing camera with HDR+ and a f/2.4 aperture; a 2GHz octa-core Qualcomm Snapdragon 810 v2.1 SoC; 3GB of LPDD4 RAM, a 3450mAh battery with Quick Charge support providing up to 7 hours of charge in 10 minutes, and dual front-ported speakers. It will be available in Frost White, Aluminium, and Graphite colour variants. 64GB and 128GB inbuilt storage variants will also be available.

The Nexus 5X on the other hand features a 5.2-inch full-HD (1080×1920 pixel) display with Corning Gorilla Glass 3; a 1.8GHz hexa-core Qualcomm Snapdragon 808 SoC; 2GB of LPDDR3 RAM; a 12.3-megapixel rear camera with 4K and slow-motion (120fps) video recording, apart from an f/2.0 aperture, and a 5-megapixel front-facing camera with HDR+ and a f/2.0 aperture. It features a 2700mAh battery, with Quick Charge support providing up to 3.8 hours of charge in 10 minutes. It will be available in Carbon Black, Quartz White, and Ice Blue. A 32GB inbuilt storage variant will also be available.

Google at the event also unveiled the Pixel C tablet, the latest in its lineup of Pixel devices that are meant to push the envelope. The large Android 6.0 Marshmallow-tablet is arguably Google’s attempt to take on the iPad Pro from Apple, a device that has already garnered much interest.

Said to be the first tablet built entirely by the Mountain View giant, the Pixel C features an anodised aluminium body and comes with a full-size keyboard dock that clips on magnetically and connects via Bluetooth. The keyboard can be magnetically attached to the back of the tablet for storage, and can be charged inductively through the tablet.

The Google Pixel C sports a 10.2-inch (2560×1800 pixel) display, and is powered by an octa-core Nvidia Tegra X1 SoC with a 256-core Nvidia Maxwell GPU, coupled with 3GB of RAM. It also features a USB Type-C port, and four microphones. The tablet will start at $499, with the $149 keyboard an optional accessory – it will ship this holiday season.

The Android 6.0 Marshmallow update will start rolling out to the Nexus 5, Nexus 6, Nexus 7 (2013), Nexus 9, and Nexus Player devices from next week.