OnePlus, as promised, on Thursday revealed more details about the upcoming OxygenOS and also introduced the team behind the new OS. The company showcased the new logo for the OxygenOS while also announced March as the release month for the new OS for OnePlus devices during a Reddit AMAA session. 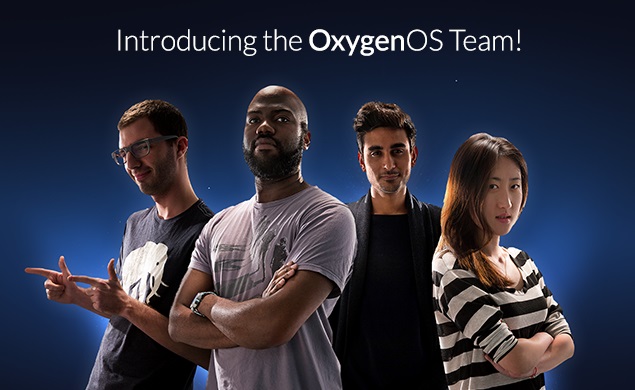 Carl Pei, the Co-founder, Director of Global at OnePlus in a blog post introduced the team working on the OxygenOS which includes Helen (Canada) who will be Head of Mobile Product; Aaron (USA) as Android Technical Lead, and Arz (India) as lead UI/UX designer for OxygenOS. The team largely included experts from the Paranoid Android community, including the co-founders of the popular custom ROM.

Apart from the named OxygenOS members, OnePlus has over 50 more engineers and testers working with the team.

The new OxygenOS team headed to Reddit for an “Ask Us (Almost) Anything!” session where some more details about the OS were revealed. One of the most notable questions was about the release time frame of the OxygenOS and Helen replied “Next month.” The answer however received a joking reply from Pei, who said, “What really?”

Also notably, OnePlus One users will not be able to upgrade their CM11S or CM12S-build smartphones to the OxygenOS via an OTA update. Instead, they will have to download and flash the ROM – usually requiring slightly complicated steps and the knowledge of how to backup and recover all the data on the smartphone. Future devices will come with the OS pre-installed. CM12S will be available OTA, and “future CM12S builds as well”, Pei added.

OnePlus in the blog stressed about keeping the new OS clean and simple to use. “As we’ve promised before, OxygenOS will not ship with any bloatware. We’re keeping it clean and streamlined for performance. We value things like battery life and system efficiency, so we’ve remained true to our ROM’s namesake and created a seamless experience that is lightweight and essential.”

Answering a question about if an Android 5.1 build will be released for the OnePlus One, Helen said, “We plan on releasing, the first Oxygen build based on Android 5.0.2 after that we will see, but we plan on supporting the One for at least another year.”

The Cyanogen OS is more popular for its customisations and openness of the operating system. However, things seem to change with the OxygenOS as tipped by one of the team members. While replying to a question from a Redditor, “Since u mentioned it will be a community build, will it be open source and other third party developers can contribute by adding fixes and features? And do u have a git we can access?” Helen replied saying, “Our production release won’t be a community build. It will be a real OS We’ll open source the kernel of course.”

Helen’s statement essentially clarifies that instead of being a community build, it would be company managed. CyanogenMod founder Steve Kondik could not resist and reacted to the “real OS” reference by saying, “You can love CM or you can hate us, but we have no plans of taking our toys and going home. The vibrant, active developer community around CM, it’s forks, and even the “anti-CM” ROMs is where the action is.”

The reply from the OxygenOS team has certainly raised questions about openness of the new OS from OnePlus. Android Police speculates, “It sounds like OnePlus is going for a more closed approach akin to HTC Sense or TouchWiz.” However, the team at the AMAA also clarified OxygenOS “will be closer to Stock then something like MIUI…”

The AMAA further saw the team clarify the users will have no built-in option to root the smartphone themselves, but will feature a custom recovery option that will enable them to flash other ROMs easily. Also, the OxygenOS would do away with the custom CM11S camera app for OnePlus, and use only the Google Camera. Helen said, “For this release, we will ship with the Google camera by default. That does not prevent anyone from downloading which ever camera app they like from the store. Most features should still be supported. We are working on an awesome camera app for the v2 release.” Also notable, is that first stable build of OxygenOS will not support themes.

Talking about the new OS, Pei notes on the blog, “OxygenOS is built with the same focus on quality and community-driven design that you’ve come to expect from our hardware, and the simplicity of our new logo extends to the software itself. We promise that any additional features will be non-obtrusive and extremely useful (tap-to-wake and customizable navigation buttons, for example). With OxygenOS, we want to build something that works for users and gets out of their way. And, that’s exactly what we are doing.”

Explaining about the delay in rolling out the new OxygenOS, Pei said, “There are various certifications that must be completed before releasing a Lollipop-based ROM, and this takes some time. We’ve decided to move forward with a fully-stable build, which is currently in the testing phase.”

Responding to a Reddit user about the Cyanogen-OnePlus tussle in India, Pei said, “We’re working together on supporting the One and of course the CM12S build. We wouldn’t be where we are if not for Cyanogen’s help. On the legal front, everyone has different understanding, and we’re still waiting for the final verdict.”