Smartphone sale is booming in India and an increasing number of people are getting hooked to them, demanding seamless connectivity anytime, anywhere. Looking at the recent trends in Q2 2013, India stood out as the world’s third largest smartphone market with total smartphone shipments at 9 million. According to the report by Canalys, Samsung took over a third of the Indian smartphone market in Q2 2013, followed by local vendor Micromax at 22%. Other vendors that made to the top 5 include – Karbonn, Sony and Nokia. 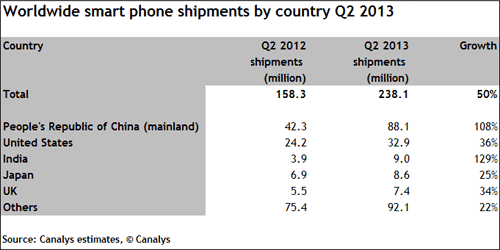 Globally, 238.1 million smartphones were shipped in Q2, registering 50% year-on-year increase with Samsung and Apple maintaining the first and second place respectively. Platform-wise, Android grew the fastest during the quarter and powered 180%, of the smart phones shipped in Q2. Apple’s iOS share fell to 13% while Microsoft’s Windows Phone and Blackberry’s shipments grew by 54% and 15% respectively.
However, for Symbian, Q2 2013 brought a bad news as its shipments slipped under the million mark for the first time since Q1 2003.