We’ve got something special at HQ today. The perfect Nexus phone has arrived and it looks like a Galaxy S4. This shameless poser embodies everything worth admiring from both worlds – timely updates, the unblemished stock Android experience, the highest-grade hardware money can buy and expandable storage. The Samsung Galaxy S4 Google Play Edition makes the LG-made Google Nexus 4 look like it should be in the minor league.

With one swift blow Samsung managed to create a mouth-watering Nexus smartphone, featuring some really hot hardware coupled with the latest software bundle.

But it makes you wonder, why did the South Koreans bother? With over 10 million Galaxy S4s shipped already, it’s unlikely that the Google Play Edition S4 will make an impact, especially when you consider the high price tag and limited availability (USA-only, no subsidies). Was the idea to make good with Google or developers? Or was it just a blatant demonstration of power.

In any case we’re happy to just let this one slide and enjoy the fruits of the holy Samsung-Google alliance, which has brought a FullHD Super AMOLED and expandable storage to the sanctity of stock Android. 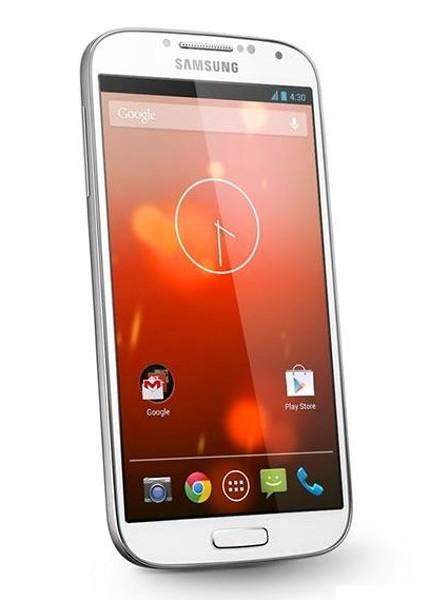 Check out what else you get from the Galaxy S4 Google Play Edition.

The Galaxy S4 Google Play Edition is not for everyone. It will be the device of choice for users that need the stock software, the way Google intends it to be, but want the absolute best hardware you can get – that’s a pretty exclusive group to develop a device solely for.

The majority of users will likely miss the TouchWiz advancements Samsung has implemented in its software package – the everything-but-the-kitchen-sink camera app, the 50 gigs from Dropbox, the smart gestures, Adapt sound, Air View, Direct Call, the list goes on and on into eternity.

But perhaps there’s a silver lining – getting both sides of the fence in a single purchase. If you’re willing to root your I9505 Snapdragon-powered Galaxy S4 you could simply install the stable stock Android ROM and still have the option to return to TouchWiz at a later time. It’s a route only advanced users will take but it gets you everything for less – the subsidized Galaxy S4 is widely available.

The hallmark of the Google Play Edition Galaxy S4 is the stock Android operating system. Sure, you could always get the same experience on a Nexus 4, but you’d be losing the huge and beautiful screen, the expandable storage, the immensely-better camera and the potent chipset – and that’s a lot.

It’s a rare enough thing to see a product which doesn’t make sense but makes you want to churn out an illogical amount of cash to get your hands on. It shoots a strong bolt of electricity through our inner geeks and makes us eager to test it, get a better feel for it, and even place it side-by-side with the Nexus 4 and start pointing bragging fingers in its direction.

A whole heap of unanswered questions begs for resolution. Does the more conventional physical-button design work well with stock Android? Will the camera kick ass just as it did on the TouchWiz Galaxy S4? Will the device be as fast, will the battery retain its high standards? Does the cleaner look and feel outweigh the perks up the TouchWiz version’s sleeve? These and many other pressing questions deserve a thorough investigation and thankfully we’ve got the right men for the job.

It’s a very impressive feat on Samsung’s part stamping a 5″ display on such a thin and compact body without making it unusable. It’s even more impressive when you consider there is a physical power button, which is also surrounded by two capacitive keys for menu and back. The Galaxy S4 Google Play Edition is still slightly taller than the Google Nexus 4 but offers a bigger screen without the need for on-screen buttons, which only waste the available screen real estate.

The US Galaxy S4 aside, the Galaxy S4 GPE is identical hardware-wise to the Snapdragon-powered version of the regular S4. The GPE only comes in White Frost, so you’d be out of luck, if you are into the Black Mist color.

The Galaxy S4 Google Play Edition has… or rather, as some would argue, suffers from the same design language used for the regular Galaxy S4. The edges are curved and smooth, plastics are hyperglazed with an underlying texture, the front is entirely made out of glass and there are chrome accents around the front, the home button, the camera, the earpiece and volume rocker.

Even though the design’s appeal has already worn off in the past year or so, the slim bezels allow the brilliant screen to really shine through, while the slim body offers a strong high-end vibe.

The stock Android doesn’t affect the usability of this Galaxy S4 in any way. The phone is still comfortable to use in one hand but users coming from a Nexus 4 would need to adjust to the physical button layout instead of the on-screen one. Ultimately, you get more screen space to work with this way.

Stock Android Jelly Bean on the Samsung Galaxy S4 Google Play Edition premiers with a new live wallpaper dubbed Sun Beam, which is the popular Phase Beam but with a warmer maroon red twist. Stock Android has never looked livelier on another display. The 5″ 1920 x 1080 Super AMOLED on the Galaxy S4 just brings out the entire OS to a whole new level.

Colors are vibrant and punchy, while blacks, which are heavily used throughout the interface are pitch black. There’s one thing to note, however – there are no screen modes or scenarios like in TouchWiz. You cannot choose Dynamic or Adobe RGB setups, you’re stuck with the default setting. That said, the default setting is nicely balanced – it’s not as oversaturated as Dynamic mode but it still packs some warmer, more saturated colors than the HTC One, for example.

At over 440 ppi the Galaxy S4 Google Play Edition’s screen looks as sharp as it gets and you can’t notice the individual pixels with a naked eye. Everything is perfectly sharp down to the smallest UI item.

The brightness levels of the Samsung Galaxy S4 Google Play Edition screen are on par with the rest of the company’s AMOLEDs, which is to say, they are not very high. However, due to the screen’s low reflectivity, this doesn’t affect outdoor performance. Keep in mind that enabling the auto tone setting in the screen option limits the maximum brightness to under 300 nits, so if that matters to you, you better keep it off.

Much like with the rest of the S4 variations this is easily the best screen on a mobile phone today.