In their third generation, the Galaxy Tab series by Samsung are finally coming to terms with playing second fiddle to the Notes. The S-Pen and the processing power are, at this point, the main dividing line between mainstream and premium, but the gap will probably widen. If you’re after latest-generation chipsets and full-HD screens, the Note line of tablets is by far the safer bet.

The Galaxy Tabs on the other hand are shaping up as the sensible, value choice. And by the way, having two distinct product lines covering the midrange and the premium segment, is perhaps helping Samsung maintain a relatively strong position despite the fact that the Koreans are clearly not doing as well in the tablet space as in the smartphone realm.

The Galaxy Tab 3 lineup comes in three screen sizes – 7.0, 8.0 and 10.1 inch. It was exactly the eight-inch version that was missing in the Samsung Galaxy Tab 2 series. The first generation didn’t have one either, there was a 7.7″ AMOLED sporting slate there instead and an 8.9″ LTE-enabled version.

The Samsung Galaxy Tab 3 8.0 conveniently uses the momentum of the eight-inch Note and, just as conveniently, is giving Samsung the chance to double-mark the iPad mini. Let’s start with the rundown. 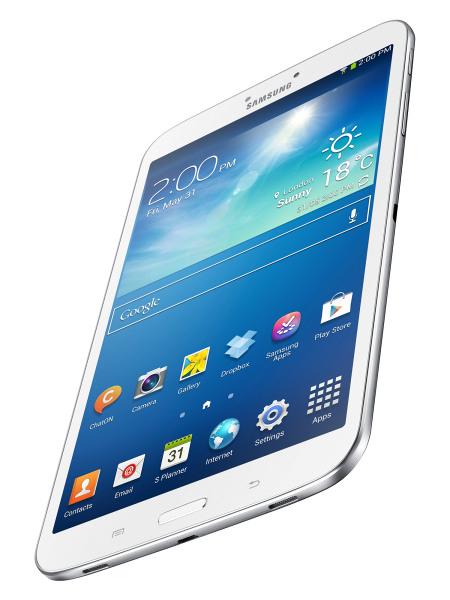 The Samsung Galaxy Tab 3 8.0 is a cheaper, lighter and thinner version of the Galaxy Note 8.0 that has given up two processor cores and the S-Pen functionality. Still even with a dual-core Exynos chipset the Tab 3 8.0 has a decent amount of power so the cost cutting might not cost too much in terms of user experience. The slate runs the latest Android 4.2.2 Jelly Bean skinned with Samsung’s TouchWiz, too, so you will be getting plenty of exclusive software goodies to make up for it.

Samsung is probably hoping that its eight-inch tablet will stand out among the seven-inchers, which makers, big and small, have been bringing to the market in droves. The good thing is the Galaxy Tab 3 8.0 makes a very positive visual impression – the slim bezels and the great screen to surface ratio are a nice advantage over the 8″ Note.

Overall, it may be a modestly equipped tablet but one that takes portability to heart – the quality build and genuinely compact size are a great place for the new Galaxy Tab 3 8.0 to start. The tablet comes in three versions, suited to every connectivity taste. The one we’re about to review is the Wi-Fi-only variant, but 3G and LTE models are be offered too, with full voice and data support at that.

Anyway, there’ll be little on the outside (other than a side-mounted SIM slot) to set the different versions apart.

The Samsung Galaxy Tab 3 8.0 stands at 209.8 x 123.8 x 7.4 mm and weighs 314 grams. It is almost as tall as a Galaxy Note 8.0 and a hair slimmer. The width has been reduced significantly though- the Galaxy Tab 3 8.0 has unbelievably slim screen bezel – slimmer than that of the seven-inch Galaxy Tab 3. It almost looks unnatural – the Galaxy Tab 3 8.0 is more like a super-sized phone than a tablet.

The design of the new generation of Tabs, much like the rest of the Samsung lineup, takes closely after the Samsung Galaxy S4 styling. The Galaxy Tab 3 8.0 joins quite a clone army of differently-sized Hyperglaze-finished devices, including the Galaxy Mega couple, the Galaxy S4 mini, the other two third-gen Galaxy Tab 3’s and even the Note 8.0.

If you have all of these laid down on a table you may have a hard time telling which is which – it’s pretty much the same situation which saw Apple on the receiving end of jokes about old and new iPhones.

The front panel of the Galaxy Tab 3 8.0 is a standard tablet affair – which, in Samsung terms, includes the usual trio of navigation controls below the display. Above the screen are the 1.3MP front-facing camera and an ambient-light sensor. The latter is the same RGB sensor as in the Note II and Note 8.0, the one that’s capable of detecting the full spectrum of the ambient light, rather than just its green channel. This results in improved performance under some types of artificial lighting.

As in other recent devices, Samsung has a way of controlling brightness without disabling automatic mode. You define an offset, so your Galaxy Tab 3 8.0 screen will always be slightly brighter or dimmer than the automatically selected level.

The left side of the Galaxy Tab 3 8.0 features the microSD card slot (and the microSIM compartment in the 3G/LTE-enabled versions).The Power/Lock key, volume rocker, and IR-port are on the right.

The top of the Samsung Galaxy Note 8.0 has the 3.5mm audio jack only.

We find the stereo speakers at the bottom of the slate, in portrait mode, on either side of the microUSB port. The connectivity port handles charging and data connections to a computer.

It is also MHL-enabled, so you can output HD video via an HDMI adapter or enable USB Host via another adapter (mice, keyboards and flash drives are supported).

The back of the Galaxy Tab 3 8.0 has the 5MP camera lens in the top left corner, slightly protruding so the slate rests on it when placed on a level surface, but its hardened glass is not too easy to scratch.

The Samsung Galaxy Tab 3 8.0 is best operated with two hands, whatever the orientation.

The super slim side bezels don’t provide a comfortable resting position for your thumbs but the flat solid sides allow a comfortable grip of the tablet with one hand across the back in portrait.

The ample space below and above the display makes two-hand operation quite comfortable in landscape. The auto-rotating homescreen and lockscreen are welcome.

Despite the good grip, you should be careful handling the Tab 3 8.0 – the hyperglaze case tends to get quite slippery.

The Samsung Galaxy Tab 3 8.0 feels rock-solid thanks to its compact size and lack of detachable elements on the chassis. The tablet is entirely made of plastic, but the Tab 3 8.0 doesn’t feel cheap or flimsy at all. It is quite lightweight though and no problem to carry around.