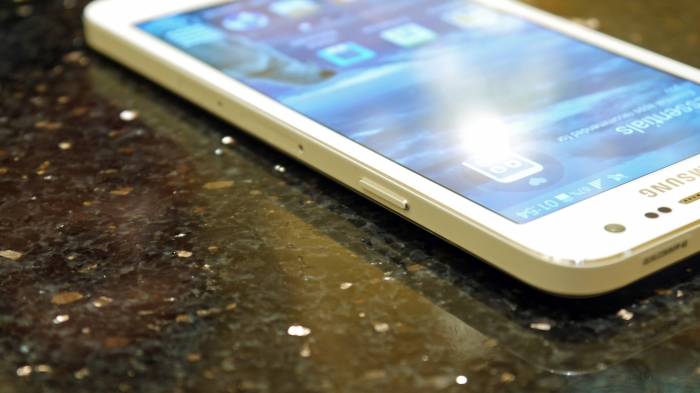 The main thing to note about the Samsung Galaxy A3 is that it’s one of the first widespread phones from the South Korean firm that brings an all metal unibody.

That fact alone should be enough to make a few of you take a look at this hands on review, given this is something we’ve been begging Samsung for for a very long time.

The Galaxy S5 just didn’t match up to the iPhone 6 and HTC One M8 in the design stakes and while the Galaxy Alpha and Note 4 improved things, they still weren’t perfect.

So why make the A series, a lower-cost range of phones from Samsung, the first to use such a design outside of South Korea?

The thing is (and I feel almost bad for writing this after demanding that Samsung ups it design language for years) the Samsung Galaxy A3 still doesn’t feel that premium. The back metal plate feels hollow and slightly polycarbonate still, so if you’re looking to get an early peek at the Samsung Galaxy S6 Mini, this isn’t it.

But that’s unfair. This is a phone that’s going to be competing with the HTC One Mini 2, the Sony M series and a selection of Chinese brands at the lower end of the scale. It’s light, the 4.5-inch screen is more impressive than you’d expect from a qHD option and the general use feels surprisingly snappy. 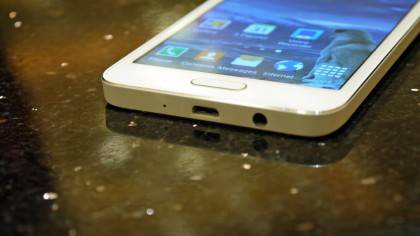 The surprise comes when you consider the specs: a quad-core 1.2GHz Snapdragon 400 CPU with 1GB of RAM, which isn’t too far from what was used in the Samsung Gear Live Android Wear watch.

I’d worry about the A3 over a long period of time, given that it will probably start to suffer somewhat with more apps placed on it, but at the lower end of the pricing scale it seems perfectly serviceable right now. 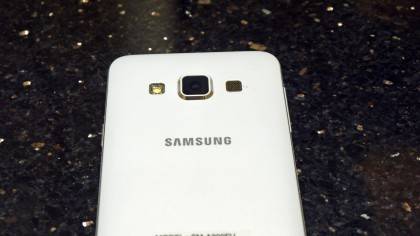 After the curiosity that was the Galaxy Alpha, Samsung’s decided to reverse the design decisions made there: where the more expensive model has a removable battery and no memory expansion, the power pack in the A3 is locked in but there’s a port to slot a microSD into.

The latter will help a lot, given this is still native Touchwiz running atop Android 4.4 (although I’m still getting the exact iteration of the OS confirmed) which means that the OS will take up a relatively large amount of the space on the device (although nowhere near as bad as it used to be for Samsung).

There’s also the issue of apps nabbing all the internal memory, which thankfully should be slightly appeased by the expandable memory.

The battery life of the Samsung Galaxy A3 should be more than acceptable, given it’s got a 1900mAh battery. That might not sound like much, but given the lower-spec CPU and RAM, combined with the lack of pixels compared to today’s 1080p beasts, Samsung should be able to make some significant savings here when it comes to juice retention. 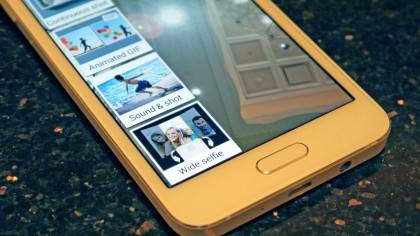 The other ‘big’ thing here is that the Wide Selfie mode, which curiously debuted on the Galaxy Note 4 (when such a trick would be better suited to the more budget handset that the youth can afford) is indeed present on the Galaxy A3.

The results were fine on the 5MP camera on the front of this phone, and the 8MP snapper on the back, while looking a touch washed out compared to its A5 brethren, was competent enough and will probably deliver good enough photos for the money.

The rest of the Samsung Galaxy A3 is really rather hard to typify, and that’s something which is becoming common in many Samsung phones. The TouchWiz overlay still doesn’t impress, and while I really like the steps forward taken with the design, it still doesn’t fill me with stroke-worthy wonder as you’d hope an all metal phone would.

Things like the protruding camera model irk, as that extra space could have been extended to make the back of the A3 a little thicker and let you get a bigger battery in there.

But otherwise, this feels like a solid and well made phone from Samsung, something that sits well next the Alpha (and could really be considered as the Galaxy Alpha Mini) and fills a hole in the supply chain that Samsung didn’t fill with the Galaxy S5 Mini. 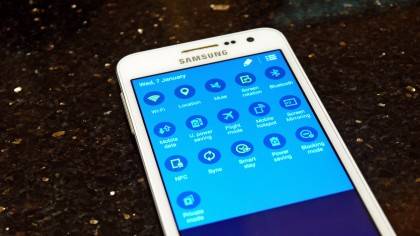 The all metal design is a step in the right direction for Samsung, and the speed and precision with which this phone performed was impressive, given the amount of grunt under the hood.

The screen was bright and sharp too, with me guessing it was 720p rather than the qHD on offer. The cameras look mighty as well, and if you’re Samsung fan, TouchWiz is there and unencumbered.

While I feel like a hypocrite for suggesting it, the all metal design of the A3 doesn’t really screen premium in the way you’d expect it to. It’s too light, feels too hollow and doesn’t really add much right now.

That said, it’s still one of the most beautiful phones Samsung has ever produced.

The Galaxy A3 will sell pretty well thanks to the loyalty fans have for the brand and the likely lower price point. Some users might which there were a few minor adjustments to improve the phone no end – perhaps that’s what will happen with the Samsung Galaxy S6?