Vodafone India has recently started a brand campaigning in Mumbai to increase 3G penetration in the circle. ‘Be Smart‘, as it is called will promote 3G services to Vodafone’s smartphone customer base. The brand promotion of Vodafone 3G comes at a time when Reliance Communication just launched 3G services at 2G prices. Airtel had launched an One-Time-Recharge of 3G pack at 2G price – but with out any big promotion – probably they are waiting for feedback.

Incidentally Mumbai is Vodafone’s one of most successful circle – Vodafone leads here with 6.5 million customers (April data, COAI), accounts for highest postpaid customers and highest data revenue and 3G revenue is growing at 12-14% on month-on-month basis. 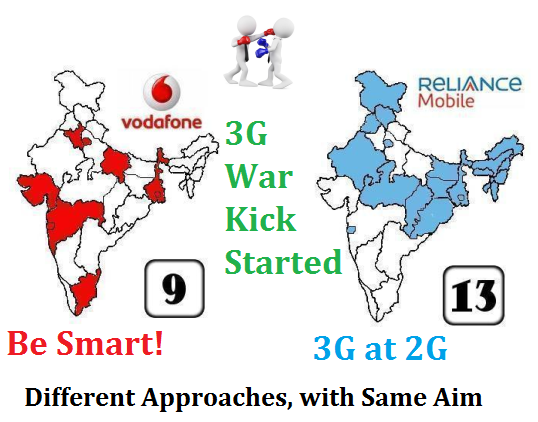 While Reliance is playing a price game to tap smartphone and tablet users in 13 circles, Vodafone with 9 circles has just started an initiative to push 3G. And to start with Vodafone chose its best circle – Mumbai where socioeconical status is also good to drive 3G adoption among masses.

Now what I said earlier, cutting down Pay-As-You-Go data tariff on 2G and 3G is a welcome move but it can’t give a break-through in interet usage among Indians.

Vodafone clearly stated that there is no reduction of tariff of exisiting 3G packs, but introduced a new plan – for Rs 44 you can get 175 MB data for 7 days.

Our beloved reader, Esmail Beguwala pointed out that Reliance is doing no good with these low cost 3G data plans. I disagree with him. I already made a story welcoming Reliance’s move to start tariff war on 3G turf. However as he told that Reliance hiked prices on 5GB+ plans and removed long validity plans (reason is simple why I invest for future, while in future 3G data will get cheap for sure. Remember Reliance Jio 4G is coming), I like to say one thing 3G is tricky business for all mobile operators in India. Reliance used their customers’ data usage pattern to bring the revisions and targeting mobile, smartphone and tablet users whose usage per month alway below 4 GB. They are not looking into dongle users who are going to use 3G on laptops and desktops. Regular and popular plans at a 2G rate is certainly welcome move from Reliance.

Now see what Vodafone will do. They are not engaging into tariff war rather via this campaigning they will educate people about other sides of 3G apart from just internet – popular mobile applications like videos and music, navigation, social networking, online gaming and live stock market updates; in short people will learn to get maximum out of his handsets with Vodafone 3G. That’s a different approach compared to Reliance.

At the end I welcome both moves from Reliance and Vodafone as both are targeting 3G customers, in different ways. But Vodafone must keep in mind that Indians love price game – make it cheap, sell in volumes and count profits. Either you response to tariff war (which is going to be intense with Reliance Jio’s entry with 4G/LTE) or you bleed!