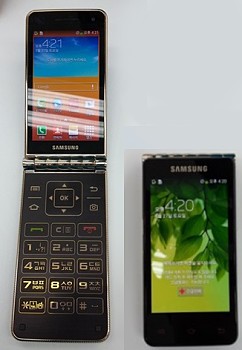 It seems Samsung is actually going to really do that clamshell Android smartphone after all. When we first saw it, we were hoping that the Galaxy Folder is merely a dead prototype, but a new live image suggests it’s actually still in development and edging closer to release.

At the start of the week we saw a leaked manual detail the specs of the smartphone – a couple of WVGA AMOLED screens plus Snapdragon 400 chipset with a 1.7GHz quad-core Cortex-A7 CPU and 2GB of RAM. There will be a couple of cameras too as well as rich connectivity options including LTE.

Now we also got to learn the possible name of the upcoming Samsung smartphone. According to the latest gossip it will be marketed as Samsung Galaxy Golden in South Korea. It’s unclear if the smartphone will make it to other markets and if it will retain the same name there.

If it does, would you be interested in getting a clamshell Android smartphone? Share with the rest of us in the comments section below.