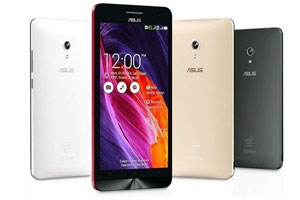 Mumbai: ASUS had rolled out its three smart devices – the Zenfone 4, Zenfone 5 and Zenfone 6 in January 2014. The Zenfone 6 is an easy-to-use phablet and looks smart too. The handset is is priced at a MRP of Rs 16,999. The term ‘Phablet’ is a mix of a ‘phone’ and a ‘tablet’, which has a display screen sized above 5 inches and below 7 inches.

The Zenfone 6 has a regular IPS display with no protection of any sort. The display also has a very glossy surface which is a fingerprint magnet and attracts smudges and scratches with ease. The front panel also features three touch buttons for Home, Menu and Back apart from the earpiece and the front-facing camera. The volume rocker and the power button take their place on the right, while the USB and the audio jack take their places on the bottom and top respectively.

The rear panel of Asus Zenfone 6 is made of ABS plastic and sports a rubberised, matte-finished surface. A 13MP camera and a flash are seen on the top, while the bottom sports a large speaker grill on the bottom. Although the speaker grill seems to have a stereo speaker, beneath it just lies a mono speaker driver.

The ASUS Zenfone 6 is a phablet featuring a 6-inch 1280 x 720-pixel IPS display. It is powered by a 2GHz Intel Atom Z2580 processor along with 1GB of RAM. The internal storage is 16GB, but can be further expanded up to 64GB using a microSD card. A 13MP camera is provided on the rear along with a single LED flash and its front facing camera has a 2MP sensor. Connectivity options include Wi-Fi a/b/g/n, Bluetooth, GPS and 3G. The phablet runs on Android Jelly Bean v4.3 operating system, and upgradable to Android 4.4 KitKat.

The rear panel opens up to the battery compartment, but the battery is not user replaceable. Above the battery itself are three slots for the dual SIM modules and the microSD storage card. The battery is a 3300mAh variant and can fuel the handset for approximately 28 hours, depending on the usage.

The ASUS Zenfone 6 sports a 13-megapixel shooter and a 2-megapixel front camera. The camera, though clicks good photos, has the focus take a while longer than average. Images captured in broad daylight shows over-exposed sections in areas that are brightly lit. Colours turn very vibrant and look very unnatural. Low-light photos are a bit too grainy. The overall quality of teh camera is average and one should not expect professional-like photos from the 13MP shooter. Casual photography and alike are good enough though. Take a look at some sample images clicked during the day. The first one was taken early morning, while the other two are taken during the evening and night. Notice the over-exposed sky and the grainy images.

Even though the ASUS Zenfone 6 sports a good grip (thanks to the rubberized finish), many might find it a bit uncomfortable to operate using a single hand. The screen size is a bit too large for your fingers to reach the corners. To encounter this issue, and make the user interface comfortable to use with a dingle hand, Asus has offered three screen size options —4.3-inch, 4.5-inch and 4.7-inch. Choosing the option for the screen size compresses the user interface to a smaller size to comfortably operate it. Indirectly, it simulates a smaller handset.

Additional features include Smart Reader Mode, whicl  automatically adjusts the background tone to reduce eyestrain when viewing books, magazines or websites. PC Link is also included which helps the user operate the handset using the PC. One needs to install the relevant software on the PC in order to do so. Other apps include Quick Memo, Omlet message chat, open cloud and Zen link.

The audio quality of this phablet is average and we recommend using better headphones if you want to enjoy better quality music. Videos play smooth and we had no trouble playing full HD videos. The Zenfone 6 supports all video formats without any issues.

Verdict: Most people prefer a large-screen smartphone, but find it difficult to operate it using one hand. However, the ASUS Zenfone provides comfortability by adjusting the screen to adapt to the users preference with a smaller size. For the price of Rs 16,999, we feel that the Asus Zenfone offers a decent value for money. Though the camera is average, the display quality is pretty good and the large screen offers a display quality. The lack of Gorilla Glass and an average camera performance is a bit of a put off. However, if you are not concerned about the display size and are ready to opt for a 5-incher, there are other brands in the market in which offer a better display resolution, Gorilla Glass protections, above average camera performance and a few other areas. One can opt from handsets from brands such as Xiaomi, Gionee, Samsung, Sony and a few others.