Microsoft didn’t use skydivers or stunt cyclists to introduce what it hopes will be the next big leap in computing technology. Instead, with its new HoloLens headset, the company is offering real-world examples to show how you might use three-dimensional digital images – or holograms – in daily life. 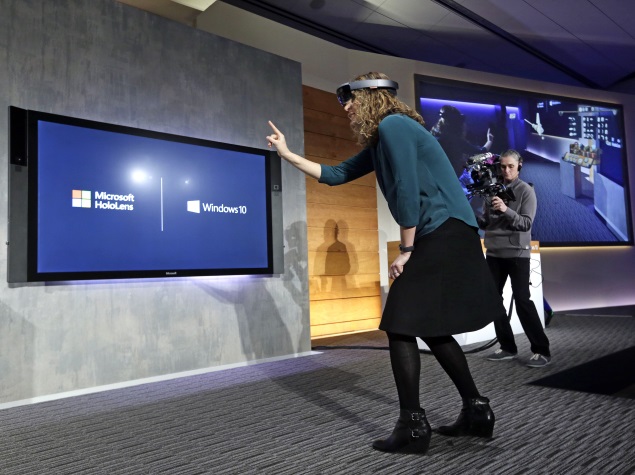 And that might be what it takes to get people to buy a computer they wear on their face.

I got a brief peek at what wearing the HoloLens could be like in different scenarios: performing a simple home repair, pretending to be a scientist studying the surface of Mars and exploring a colorful, animated game that added new dimensions to an unremarkable room.

Microsoft unveiled HoloLens at its headquarters this week, on the same day the company touted its upcoming Windows 10 software release. What I saw of the device seems unfinished, but it shows potential.

A crowded field
Some of the world’s biggest tech companies are working on wearable devices that aim to create realistic, three-dimensional representations of alien worlds or imaginary creatures.

Google’s computerized eyewear, Glass, isn’t technically a virtual-reality device, but it shows the challenges of winning consumer acceptance. Google introduced Glass in 2012 with a Vegas-style stunt that included mountain bikes and skydivers landing on the roof of a convention center. Last week, it suspended consumer sales after many people balked at the notion of wearing a digital camera and Internet-connected device on their head.

Meanwhile, Google has invested in a secretive start-up, Magic Leap, that’s working on virtual reality. Samsung and Oculus VR – which Facebook bought for $2 billion last year – are developing gaming headsets that essentially block the wearer’s view and replace it with an imaginary world. Smaller companies have developed headsets for industrial or business uses. 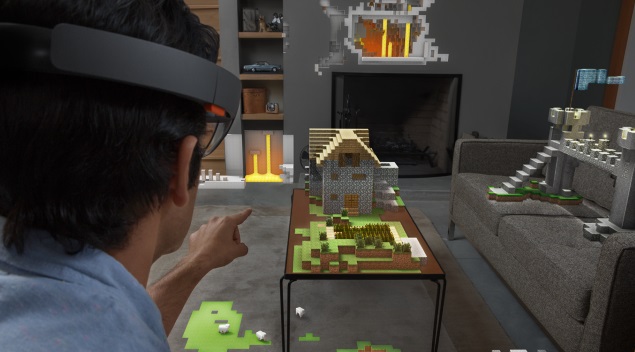 Microsoft’s HoloLens was built by engineers who created the Kinect motion-sensing system for Xbox games. It projects a realistic image on a screen in front of your eyes, but the screen is transparent, so you can still see what’s in front of you. The holograms respond to gestures and spoken commands, detected by cameras and other sensors in the device.

Walking on Mars
The most striking demonstration involved a project in which Microsoft partnered with scientists from Nasa’s Jet Propulsion Laboratory. They’ve created a vividly realistic, three-dimensional landscape by knitting together photographs and data collected by Nasa’s Curiosity rover.

When I moved my head, the landscape shifted as if I was actually walking on the planet. I peered under a rock outcropping. I was joined by a digital avatar, playing the part of a JPL scientist. We spoke and used hand gestures to place digital markers on different rocks, in an exercise simulating how scientists might use the system to direct the rover’s exploration.

A more whimsical demonstration involved the Microsoft-owned “Minecraft” game. In a small living room, the HoloLens projected three-dimensional structures and animated creatures on an actual coffee table. I summoned imaginary tools and blasted a simulated hole in the room’s actual wall – and was surprised to see cartoon bats fly out.

But another exercise brought home how useful the gadget might be. I was guided through the process of installing an electric light switch. I saw a woman who showed me a series of sketches and talked me through each step. She was working in real time in another room, drawing sketches on a tablet computer and using Skype to talk with me. I could see the sketches, super-imposed over an actual wall outlet and protruding wires, while her face appeared to one side.

What’s the potential?
Microsoft engineer Alex Kipman said the company has built programming tools so outside developers can use Windows 10 to create more holographic apps. Kipman called HoloLens “the next step” in moving “beyond today’s digital borders.” Meanwhile, Facebook CEO Mark Zuckerberg has said virtual reality will be the next major wave in computing and communications. 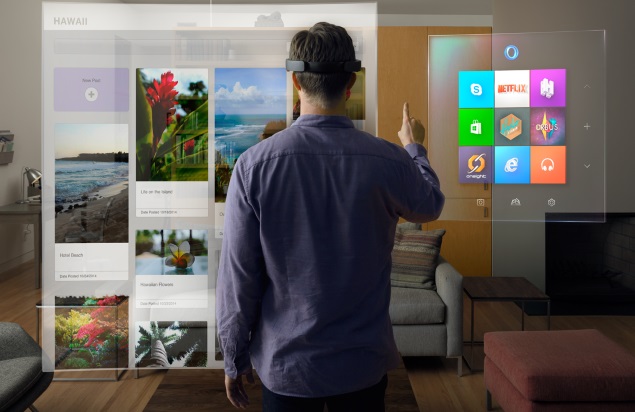 Microsoft executives talked about other uses – from helping a surgeon learn a new operating technique to designing objects for 3D printers. I could also see applications in the kitchen, classrooms and retail shops.

But it’s not yet clear when HoloLens will be out, or how much it will cost. While executives showed off a sleek prototype, they used a heavier, clunkier version for up-close demonstrations. It had cumbersome straps, wires and extra gear stowed in a pouch around the wearer’s neck.

Still, if Microsoft can produce a working product at a reasonable price, it might help move computing to another level.