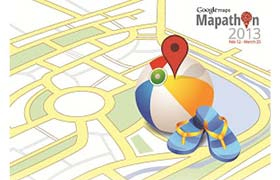 New Delhi:The Google Mapathon event case, in which the US internet giant allegedly violated Indian mapping laws, has been sent to the home ministry with the recommendation of a probe by the CBI cyber crime cell, said BJP MP Tarun Vijay.

“Delhi Police Commissioner Neeraj Kumar has informed that the case against Google India for violating Indian mapping laws has been recommended to be investigated by the cyber crime cell of the CBI and sent to home ministry for taking further action as the case is a national issue,” said a release issued on behalf of Vijay.

The Bharatiya Janata Party (BJP) leader said he had already given a call attention notice in parliament in this regard and hoped the government would come out with a statement.

He alleged Google publicly showed air force stations, ammunition depots and identified the positions of the fighter planes. Vijay said Google had sent a reply to Surveyor General of India and released it content to the media so as to show the surveyor in poor light.

Google, which ran the “Mapathon” in India in February and March, said its aim was to make more local information accessible to all and that it did not break any laws.Google invited users to help “create better maps for India” by adding knowledge of their neighbourhoods and promised the top 1,000 mappers prizes of tablets, smartphones and gift vouchers.

Latest in series of disputes

The investigation is the latest in a series of disputes between various governments and Google over privacy and security issues involving its popular mapping products.

In March, Google agreed to pay $7 million in the United States to settle an investigation into an incident in which its Street View mapping cars allegedly collected passwords and other personal data from home wireless networks between 2008 and 2010.

In 2011, city police in the southern Indian technology hub of Bangalore ordered Google to suspend a Street View service over security concerns, three weeks after the company started collecting images from the city.