Samsung is getting very popular these days i.e eight out of ten Android devices a user uses belong to Samsung the famous korean handset manufacturer.

As per reports published by Localytics Samsung Galaxy SIII is one of the most popular Android devices others handsets were in the list like Galaxy SII & Galaxy Ace.

This data has been gathered by Localytics from Android Apps usage to determine ”Top 10 Android devices” used by users in Jan’2013. This new record shows that 47 percent of Android devices beongs to Samsung.There were 2 non-Samsung manufacturers who were having their Android tablets like Amazon Kindle Fire tablet and the Motorola Droid Razr. 37 percent of all Android tablets belongs to Kindle Fire & most of the users who were using this tablets belongs from U.S. as per Localytics. 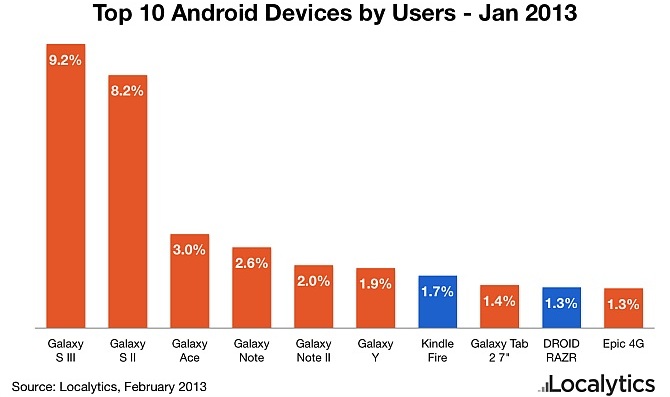