Samsung Galaxy S IV to be launched on March 14 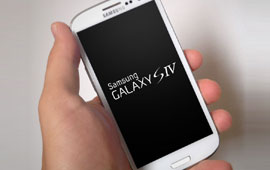 Earlier, there were reports that the next-generation Samsung Galaxy S smartphone would be unveiled on March 15, but now the Internet is abuzz with reports that the successor to the highly successful Galaxy S III, unofficially dubbed “Galaxy S IV”, is highly expected to be revealed on March 14. It means that the company will announce the Galaxy S IV around 2 weeks after the Mobile World Congress 2013 in Barcelona.

According to a report from The Verge, Samsung is likely to come up with one or more new devices on March 14, and one of which is presumed to be the Galaxy S IV. SamMobile also reports that the company is going to announce the Galaxy S IV in New York.

Besdies, Mobile-Review’s Eldar Murtazin tweeted about a big announcement on March 14. His tweet reads as, “Save the date for a big announcement – March 14 🙂 And keep silence 😉 HTC will miss HTC One sales again 🙁 Like it was in 2012.”