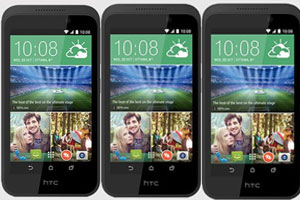 HTC has unveiled the Desire 320, which can be considered as the successor of Desire 310. The newly launched 4.5-inch HTC Desire 320 features a FWVGA screen, having a resolution of 480 x 854 pixels.

Powered by a 1.3GHz quad-core processor, the handset will offer 1GB of RAM. HTC Desire 320 runs on Android 4.4 KitKat operating system and also sports a 5MP rear camera that supports 1080p video recording/ VGA front camera. GSMArena stated that this handset will carry 512MB RAM or 1GB depending on the region.

The in-built storage capacity of the 4GB and 8GB variants of HTC Desire 320 is also expandable up to 32GB via microSD card.Pocket-lint also stated that the HTC Desire 320 will likely be fuelled by a 2,100mAh battery, which can deliver 12 hours of talk time.

The HTC Desire 320 will first arrive the UK market and is expected to launch in India soon.