Canonical is all set to release its first Ubuntu-based smartphone in partnership with Spain’s BQ, a company known for making ebook readers, smartphones and tablets in Europe. The smartphone, named Aquaris E4.5, has till date been available with Android 4.4 KitKat OS, and will now be released in a new version running Ubuntu OS for phones, which has previously also been called Ubuntu Touch OS. The smartphone is dubbed the BQ Aquaris E4.5 Ubuntu Edition. 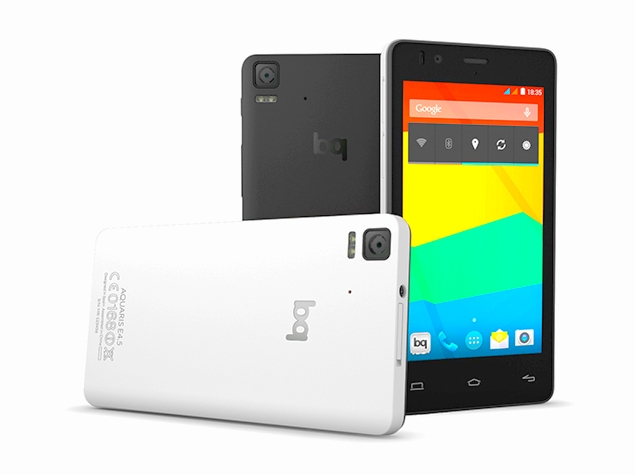 The BQ Aquaris E4.5 Ubuntu Edition, as per Canonical, will be available across Europe in the ‘coming weeks’ through a flash sales system, which has proven to be successful for handset makers in India lately. The smartphone is priced at EUR 169.90 (roughly Rs. 12,000). Both Canonical and BQ have not yet mentioned the handset’s availability details outside the European region as of now. As TheNextWeb notes however, the partnership with BQ is almost a year old, and the Spanish manufacturer, along with China’s Meizu, did not stick to their original 2014 launch timeline. Not that BQ has announced its Ubuntu phone, we can expect a similar offering from Meizu soon.

The dual-SIM (Micro-SIM) supporting Aquaris E4.5 Ubuntu Edition has identical specifications to the original model except the software, which has now been changed from Android to Ubuntu. The smartphone features a 4.5-inch qHD (540×960 pixels) resolution display with pixel density of 240ppi. Powered by a quad-core MediaTek processor (Cortex-A7) clocked at 1.3GHz, the handset includes a Mali 400 GPU for handling the graphics, coupled with 1GB of RAM. 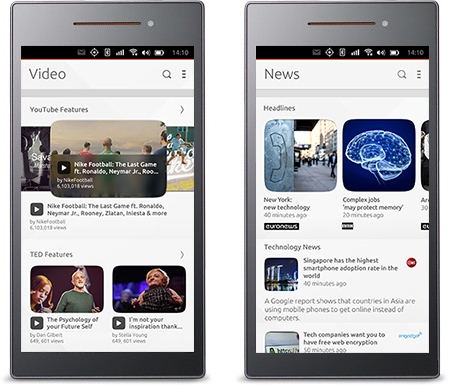 The BQ Aquaris E4.5 Ubuntu Edition measures 137x67x9mm, weighs 123 grams, is backed by a 2150mAh Li-Po battery and will be available in Black colour variant only. Ubuntu is detailing its the edge interactions and Scopes features of its OS for smartphones. Users can access sections like music, video and social quickly with swipes from the home screen. The sections that show up feature the company’s Scopes UI, which is claimed to be a ‘reinvention’ of the mobile UI. Scopes, or categorised home screens, provide a unified view of content in the particular category. The Ubuntu OS for phones run native apps or HTML5 apps. The company has tied up with major developers to ensure Facebook, Twitter, Dropbox, Evernote and Amazon apps are available at launch.

“The launch of the first Ubuntu smartphones is a significant milestone. The new experience we deliver for users, as well as the opportunities for differentiation for manufacturers and operators, are a compelling and much-needed change from what is available today. We’re excited that a rising star like BQ has recognised this opportunity and is helping us make it a reality,” stated Jane Silber, CEO of Canonical about the launch.

Canonical, with the BQ Aquaris E4.5 Ubuntu Edition, has made a move in the smartphone market after more than two years since its first showcase of Ubuntu Phone platform in January 2013. It is worth noting that the firm tried raising funds for its Ubuntu Edge smartphone in 2013 but failed to achieve the $32 million goal as the campaign closed with $20 million outstanding.