In Samsung’s playbook, a mini version of the top smartphone is typically the first new addition to a flagship’s fleet. Sticking close to a proven formula, the Galaxy S4 mini is a downsized and down-priced edition, but one that certainly wants to live its own life instead of just being the poor man’s S4.

The other flavors of the flagship – the Galaxy S4 Active and the Galaxy S4 Zoom – are more or less niche versions, while the S4 mini should probably have broader appeal. Some of the top end features are obviously missing, both hardware and software wise, but it’s a package that has plenty to offer to users who don’t necessarily have to have the latest technology.

Samsung decided to stick to Super AMOLED for the new 4.3-inch display, but lowered the resolution to qHD (540 x 960 px). The chipset that powers the Galaxy S4 mini is Qualcomm’s latest midrange offering – the Snapdragon 400 – with a dual-core 1.7GHz Krait processor and Adreno 305, which is the low-end member of the latest generation of graphic chips integrated into Snapdragon SoCs.

The still camera has also been downgraded – but 8MP of resolution is actually nothing to frown at. Some of the premium shot modes are missing, but it’s still a very capable shooter, with HDR, panoramas, photos with audio, etc. And it does 1080p videos of course.

Finally, the Galaxy S4 mini is powered by the same software combo as the flagship: Android 4.2.2 Jelly Bean and the latest TouchWiz UI. 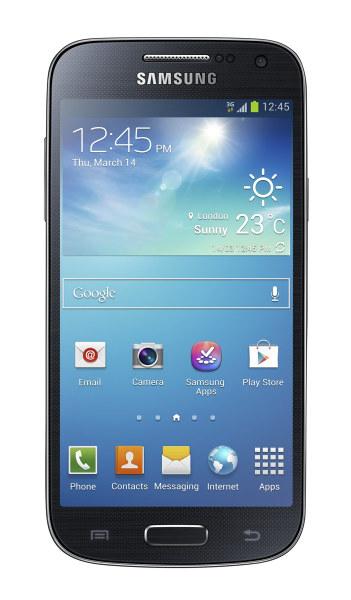 As the Galaxy S4 mini lacks some of the sensors, the cool Air Gestures are not enabled. The Air View is not an option either, along with the Multi-View split screen feature. What the Galaxy S4 mini offers over the flagship S4 is an FM radio, a feature that the intended market is likely to appreciate.

Overall, the Galaxy S4 mini copies the original design to a T, but has to do without some of the premium features and last-gen hardware of its greater sibling. It’s a compact and more affordable alternative – and aiming to be one that many people end up buying.

The Samsung Galaxy S4 mini is a downsized replica of the flagship only it has much less imposing physique. Keeping the same styling and finish as the top product in the lineup was obviously a conscious choice – the aura of the flagship is probably expected to be a major sales driver. Some kind of design accent to bolster the mini’s character may’ve made sense though, we think. Particularly when you consider how played out the design has become at this point – it’s only undergone a small refresh since the Galaxy S III came around and we’ve seen in on a few dozen devices already.

Anyway, let’s take a good look at the handset. Bellow the display you get the usual three keys: capacitive Menu and Back buttons and a regular press Home key.Above the display we have the earpiece, as well as the usual ambient light and proximity sensors. What’s missing is the Air gesture sensor – the mini version doesn’t have that feature. There’s a 1.9 megapixel front-facing camera for video-calls.

The left side of the Samsung Galaxy S4 mini is where the volume rocker is located.On the right side there’s only a power key. Considering the original Galaxy S4 hasn’t got a dedicated camera key, we couldn’t possibly expect to find one here.

The top of the Galaxy S4 features the 3.5mm audio jack, the secondary microphone and the IR blaster that allows you to use the smartphone as a remote control for your home appliances. There’s also a feature-rich remote control app, so the functionality is available right out of the box.

The microUSB port resides alongside the primary microphone at the bottom and is used for both data connections and charging. There’s no USB host and MHL support.The Samsung Galaxy S4 mini sports an 8MP camera, capable of recording 1080p video, and a LED flash. The loudspeaker grille is in the bottom left corner.

The package is powered by a 1900mAh battery. The microSD card slot and the microSIM compartment are located under the battery itself, so hot-swap is not an option.

The Samsung Galaxy S4 mini is really easy to handle with its curved back fitting nicely in the palm of your hand. Given the friendlier, compact size, the slippery finish is a lot less of an issue than it was in the bigger Galaxy S4. Single-handed operation is very comfortable and the AMOLED screen is a pleasure to look at, both indoors and outdoors.