Ever since Apple’s release of the first iPad, Samsung has been churning out tablets to battle them on so many fronts it’s starting to look like overkill. With so many larger Galaxy Tab and Galaxy Note varieties out there, it makes sense that Samsung would try to compete against Apple’s latest offering too, the iPad mini.

The Samsung Galaxy Note 8.0 caters to a crowd that wants in on the whole tablet game, but wouldn’t go all-in with a full-size device. Samsung is able to deliver on this, building on the market experience of its phablets, the S-pen-enabled Galaxy Note and Note II.

In fact, the similarities between the Samsung Galaxy Note 8.0 and Note II go even further than the S-pen, as both devices feature the same chipset and processor speed, Android build, and very similar display resolutions. Here’s a quick look at what’s going on under the hood of the Galaxy Note 8.0: 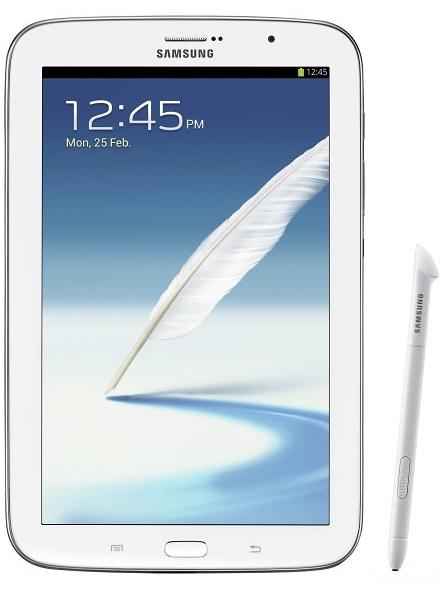 Samsung has done well to offer a device that can compete with the iPad mini across the board. The Note 8.0 gives you a higher resolution WXGA screen, as well as a more robust chipset, and, of course, the S-pen. Samsung even managed to trim down the waistline compared to other Note devices, bringing the 8-inch screen in just 8mm of thickness.

Samsung’s latest retail packaging is made entirely of recycled paper and printed with soy-ink. It’s also 100% recyclable and eco-friendly.

The Samsung Galaxy Note 8.0 comes with the standard set of accessories you’d expect in a smartphone’s retail box, with the notable absence of headphones. Otherwise, the A/C adapter that you need to use is here, alongside the supplied microUSB cable.

Weight-wise, the Note 8.0 comes in about 338 g, or about 25 grams heavier than the mini. Whether or not the extra heft is worth it depends on your need for an S Pen and the Wacom digitizer that comes with it.

The design ethos takes after what was first introduced by the Samsung Galaxy S III. Although you won’t be confusing the two anytime soon, it’s easy to see that the two devices are signed by the same manufacturer.

Samsung Galaxy Note 8.0 side by side with the Galaxy S III and the iPhone 5

We must say the hyperglaze finish somehow manages to look better on a bigger scale. The front panel of the Note 8.0 has several interesting elements other than the screen. Above it is the 1.9MP front-facing camera and proximity sensor.

Speaking of the ambient light sensor, we have to note that the Samsung Galaxy Note 8.0 got the same RGB sensor as the Note II, the one that’s capable of detecting the full spectrum of the ambient light, rather than just its green channel. This leads to improved performance under some types of artificial lighting.

As in other recent devices, Samsung has a way of controlling brightness without disabling automatic mode. You define an offset, so your Galaxy Note 8.0 screen will always be slightly brighter or dimmer than the automatically selected level.

Below the screen is the classic arrangement of physical hardware Home key flanked by the capacitive Menu and Back keys. This layout has been in use since the early days of the Galaxy line and Samsung decided not to put the Android keys on-screen (as Google dictates) even on a screen this big.

This, by the way, makes the Note 8.0 one of the very few Android-powered tablets with a hardware Home key, which puts it in the same bracket with no other than the Apple iPad.

The familiar set of keys at the bottom

The sides of the Note 8.0 hold no surprises either, a microSD card slot on the left and a Power/Lock key, volume rocker, and IR-port on the right. The 3G/LTE enabled N5100 version of the tablet has a SIM compartment of course on the left as well. We’re testing the Wi-Fi only N5110 model.

There are just a couple of keys on the sides

The top of the Samsung Galaxy Note 8.0 features only the 3.5mm audio jack.

There are a pair of speakers at the bottom, on either side of the microUSB port. The microUSB port handles charging and data connections with a computer, and is MHL-enabled, so you can output HD video via an HDMI adapter or enable USB Host via another adapter.

Having the stereo speakers at the bottom isn’t the best possible decision. The front-facing landscape oriented speakers on the Note 10.1 are by far superior for both gaming and multimedia consumption.

The stylus slot is at the bottom too, with the top of the S Pen curved to fit the shape of the Note 8.0. The stylus itself isn’t perfectly round like the original stylus, so it doesn’t rotate in the slot, making it easier to put back in.

There’s little of note at the back of the tablet. The 5MP camera lens is centrally placed at the top, slightly protruding so the Note 8.0 rests on it when placed on a level surface, but its hardened glass is not too easy to scratch.

The back features the 5MP camera lens

In terms of handling, holding the device in one hand across the back is possible – but it wouldn’t be a lot more comfortable than the iPad mini. With a 4:3 screen, the Apple tablet is anything but narrow – and the Note 8.0 is even slightly wider, mostly on account of bigger screen bezel. Other than that, the device looks reasonably good in white and can be comfortably used with two hands in landscape mode.

A pretty good display for the class

The Note 8.0 has a standard LCD – Samsung has given up AMOLED in tablets for the time being with the Galaxy Tab 7.7 remaining its only attempt so far. And this is said not without regret. AMOLED screens are now reserved for the Note phablets, while tablets get LCDs. The one in the Note 8.0 gets the job done. It has 1280 x 800 pixel resolution, which results in 189ppi and a 16:10 aspect ratio.