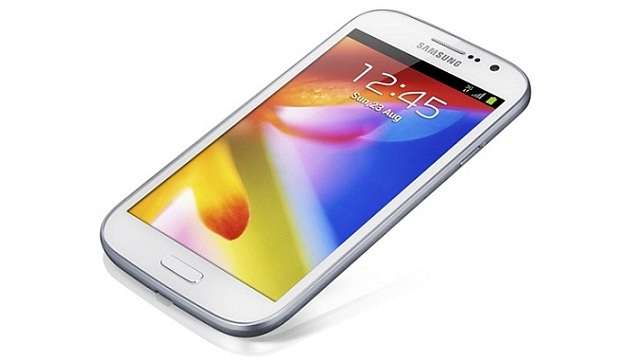 Very few current-generation low-cost Android phablets come preloaded with Android Jelly Bean; most of them come with Android ICS—however, you get the OS in the stock form. The Galaxy Grand runs Jelly Bean out of the box and not to mention, it boasts features found in the higher-end Galaxy handsets, such as Smart Stay, Pop up Play and Direct Call.

The Galaxy Grand is the first phablet from a tier 1 brand to offer dual-SIM capability in the sub-Rs 20,000 price band. Quad-band 2G is supported by both the SIM card slots, whereas 3G connectivity is supported only in the SIM1 slot.

An HD display would have made the Galaxy Grand a killer deal, but unfortunately, it sports a 5-inch WVGA display that has a resolution of 480 x 800 pixels. On the other hand, you have the Micromax Canvas HD with a 720p IPS LCD. The pixel density of Galaxy Grand’s display is 187 ppi as against 294 ppi in the Canvas HD—that’s a difference of a good 107 ppi or 57 percent in density! That doesn’t mean it’s bad; there’s ample real estate for viewing web pages and documents comfortably and videos are enjoyable on the large 5-inch display.

Form factor and weight – a tad lighter than the Note II

Weighing in at 162 grams, Galaxy Grand is 20 grams lighter than Note II. It’s also a few millimetres less in height and width, but the Note II is slimmer than the Grand by a fraction of a millimetre.

Like the Nokia Lumia 620, the Galaxy Grand is one of the few handsets in its segment to feature dual-band Wi-Fi ‘n’. So, if your router supports 5GHz wireless band, you can harness much faster connectivity.

This is grey area and we shall be able to give a clear picture only when we get our hands on the device. We got in touch with Samsung for exact details of the SoC this device uses, but we didn’t get any answer. For now, we can only say it’s powered by a 1.2GHz dual-core processor. According to one source who captured a glimpse of the Galaxy Grand at the Broadcom booth at the CES 2013, it’s quite evident that it’s powered by the Broadcom BCM28155 SoC. It comprises a pair of ARM Cortex-A9 cores and Broadcom’s own VideoCore-IV graphics engine for 2D and 3D acceleration.

Storage – 8GB with the option to expand by up to 64GB

The 8MP primary camera featured in the Galaxy Grand has the same resolution as the one featured in Note II. There’s LED flash and digital image stabilisation to help you take clear shots in low light. Videos can be recorded at 1080p at 30fps. The Canvas HD too features an 8MP camera with LED flash, but only our hands-on tests will reveal which of the two takes better photos. Also, the secondary front camera in the Galaxy Grand is a 2MP one as against the VGA camera in the Canvas HD.

The Galaxy Grand comes armed with sensors that will be of most use to the end user—accelerometer, gyro, proximity and compass. The list excludes barometer, but it’s fair for an entry-level phablet.

Both, the Galaxy Grand and Canvas HD feature a hefty 2100 Li-ion mAh battery to provide decent amount of talk time in addition to fuelling other tasks such as media playback, web browsing, gaming and so on. The Note II packs a 3100 mAh battery and it lasted for over two days without the need for a charge. Our test revealed it played a 720p video in loop for over 12 hours without any hiccup.

Off late, we’ve seen many low-cost Android phablets (such as Micromax Canvas 2 and Lava Iris 501) featuring a dual-core processor, 512MB RAM, 4GB of internal storage and at least a 5 megapixel camera—you can buy one for around Rs 11,000. Cough up another few thousand rupees and you can buy a more feature rich device like the Canvas HD. However, if you’re reluctant to consider a lower-tier brand and don’t want to look beyond top-tier brands, the Galaxy Grand is for you. The specifications look good on paper, and the price point is sweet!

Stay tuned for an extensive review of the Samsung Galaxy Grand.