HTC, Microsoft, and Sony already have phones with powerful front cameras to cater to the selfie craze sweeping across the globe. The latest to join this bandwagon is Micromax, with its Canvas Selfie.

The Micromax Canvas Selfie has a 13-megapixel front camera with flash and an app which is embellished with a ton of beautification features. The marketing campaign quite clearly indicates that Micromax is targeting women with this phone, but we’d say quite a few men would also be interested in the Canvas Selfie because apart from the powerful front camera it also has a good list of specifications. Let’s find out how it performs. 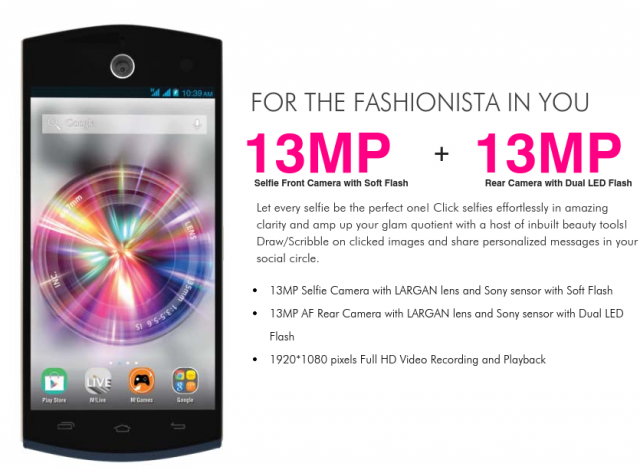 Look and feel
The Canvas Selfie is by far Micromax’s most unique design yet and probably its best one too. The phone is quite unlike other candybar smartphones we’ve seen in the past – the top and bottom are curved in a way that reminds us of the aptly-named Sony Ericsson Xperia Arc.

Available in two colours – Pearl White and Sapphire Blue – the Canvas Selfie tries really heard to steer clear of the monotony of black smartphones. The Pearl White edition has gold metallic edges and the buttons are also made of metal. The rear of the phone has a faux leather finish with stitches running along the edges which we first saw in the Samsung Galaxy Note 3 . The Canvas Selfie feels light to hold and is a great device for one-handed usage, even if slightly bulky. 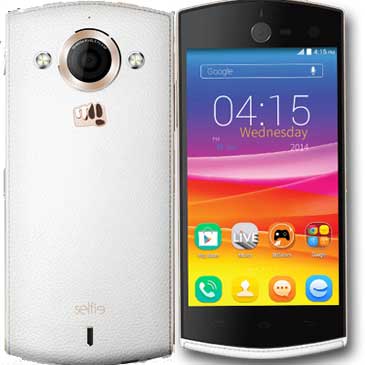 The right side has a dedicated camera button and the SIM card tray, whereas the left edge holds the volume rocker. The Micro-USB port sits on the bottom. The 3.5mm jack and the power button are on the top of the phone. Below the screen is a row of backlit capacitive buttons for navigating through the operating system. For some reason, the home button keeps on blinking and there is no way to turn this off, which is rather annoying. The front camera and flash are placed right in the centre above the display.

The primary camera on the rear has a large golden ring around it and two LED-flash modules peeking from either side. A metallic Micromax logo sits below this camera. A small vertical vent on the bottom of the rear houses the speaker and top of it one can find the word ‘selfie’.

The phone has a 4.7-inch 720p IPS LCD screen with Corning’s Gorilla Glass 3 for protection. This is one of the better displays we’ve seen on a Micromax phone – it is crisp, the colours are vibrant, viewing angles are good, and spotting pixels with the naked eye is nigh impossible. That said, the screen doesn’t get too bright, which in turn affects its sunlight legibility.

Specifications and software
As is common with a lot of phones in the mid-range segment, the Micromax Canvas Selfie has an octa-core MediaTek MT6592 processor clocked at 1.7GHz. We’d have ideally wished for the newer 64-bit MT6595 SoC inside the phone but this will do for the moment. There is 2GB of RAM and 16GB of internal storage space. The storage space can be expanded by up to 32GB using a microSD card. However, there is a catch here – the SIM card tray accepts one Micro-SIM card and one Nano-SIM, but the cutout for the latter doubles up as the microSD slot, which means that if you choose to add more storage space you will have to forego the Dual-SIM capability of the phone.

The phone has a 2,300mAh battery providing it the juice to work. It has two cameras as well, and both can shoot 13-megapixel images. The front one has only a single-LED flash while the rear one has a dual-LED flash. Wireless connectivity is taken care of by Wi-Fi a/b/g/n and Bluetooth v4.0.

Micromax has decided to go with its own interpretation of Android on the Canvas Selfie, which by the way is the same implementation we saw on the Canvas Hue. The unnamed skin on top of Android 4.4.2 (KitKat), upgradeable to Lollipop, is bereft of an app drawer akin to what we’ve seen on phones by Chinese brands like Xiaomi and Gionee. This iOS-inspired skinning is a hit-or-miss depending on the number of apps and widgets that are lined up on the multiple homescreens. 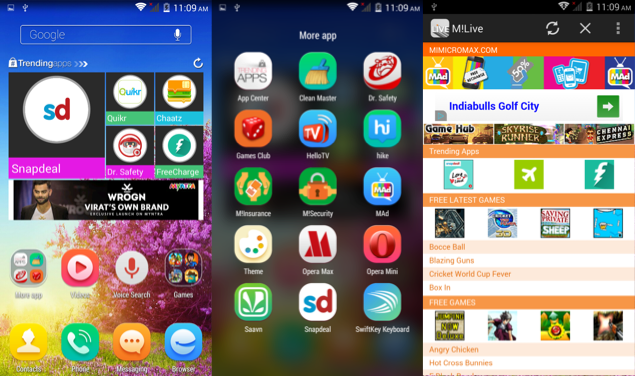 Camera
The 13-megapixel selfie camera can capture some really good details and at the same time remove all the blemishes from your face while capturing an image or in post processing. The default camera app has options that allow users to tweak each part of their face, for example, teeth can be whitened, dark circles can be reduced, and oil can be removed. There are varying degrees to which these particular settings can be tweaked.

The autofocus of this camera works really well in well-lit environments and has no problem tracking a face, in near realtime, as it moves. Our test samples had warm colours and great amount of details with absolutely no noise. We’d go as far as to say that some of the images looked as good as the ones captured by the 13-megapixel front camera of the significantly more expensive HTC Desire Eye (Review | Pictures). The low-light performance is not so great, but the LED flash manages to take care of that by throwing bright artificial light.

The primary 13-megapixel camera can also take some good images with decent amount of light and the dual-LED flash also does a good job in low-light. The camera struggled in less ideal lighting conditions and you would want to stick to using it only under daylight conditions.

Performance
In our time with the Canvas Selfie, we faced absolutely no hiccups and the phone was up to any task we threw at it. It played games with gusto, opened apps without complaining, and surfed the web like any other capable mid-range phone.

We ran our regular suite of benchmarks. In AnTuTu and Quadrant the phone scored a healthy 31,119 and 13,836 points respectively. Even the graphics benchmark tests returned good scores. The Canvas Selfie logged 17fps in the GFXbench test and 7,148 points in the intensive 3D Mark Ice Storm benchmark cycle. 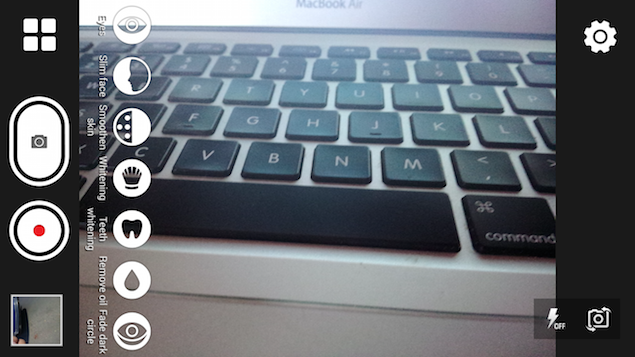 All our test videos including the heavily encoded 1080p 40Mbps one played without any hiccups. The bundled headset sounded pretty decent too, so you don’t really need a replacement. The speakers are loud and crisp but we noticed that the sound can get muffled when the phone is held in landscape orientation while playing games or watching movies. The quality of the sound in calls was not too bad but the person on the other end complained of hearing crackling more than once. In our battery test, the phone lasted 7 hours and 31 minutes, which is average at best. With moderate usage we expect it to last just about a day before one needs to pick up a charger.

Verdict
If you are someone who likes taking a lot of selfies and doesn’t want to spend a lot of money, the Micromax Canvas Selfie is right up your alley with its price tag of Rs. 15,999. Having said that, the phone is a good buy in the mid-range segment even if you do not intend to take a lot of selfies, because it is has dependable performance overall. The only thing you will need to put up with is the colourful skin on top of Android. In the same price range, the Motorola Moto G (Gen 2) , Yu Yureka , and the Nokia Lumia 730 Dual SIM are all great alternatives.