After making an appearance in some leaked pictures last month, the Micromax A111 Canvas Doodle smartphone is now available for purchase on ecommerce website, Snapdeal at a price of Rs. 12,999.

The Micromax A111 Canvas Doodle is powered by a 1.2GHz quad-core Qualcomm MSM8225Q processor and has 512MB of RAM. It has 4GB internal storage out of which 1.2GB is user-accessible. The memory can be expanded up to 32GB via microSD card. 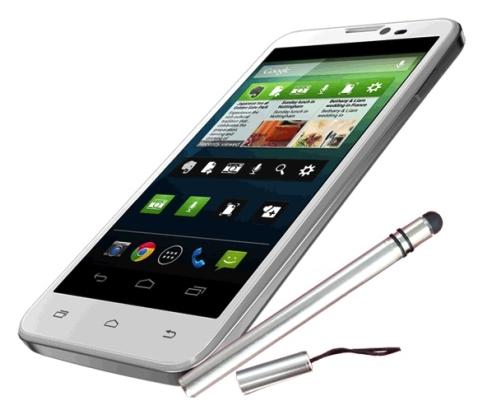 The dual-SIM dual-GSM (2G+3G) smartphone sports a 5.3-inch capacitive touch screen with a resolution of 540×960 pixels. The company is also bundling a stylus, as apparent from the Doodle moniker, but it’s not clear if it will come with special apps for jotting down notes or for doodling. However, the online listing does mention that it will come preloaded with the Evernote app. The phone runs Android 4.1.2 Jelly Bean.

The Canvas Doodle smartphone will sport an 8-megapixel rear camera and a VGA front facing camera. The camera will offer features like multi-zoom, wide screen video and night mode recording. The phone comes with a 2100mAh battery.

Just two weeks back, Micromax had announced the launch of its first 3D phone, the Micromax A115 Canvas 3D, which offers a glasses-free option to view 3D content.

A few days back it was reported that the company is also working on the Canvas HD Pro smartphone which is expected to sport a 5.5-inch full-HD display. The Canvas HD pro is rumoured to come with a Cortex A7 quad-core processor along with 2GB of RAM. It is expected to offer 8GB of internal storage expandable up to 64GB via a microSD card. It’s also expected to feature a 13-megapixel rear camera and a 3.2-megapixel front-facing camera.