It’s been a well documented and, some might say, overly-teased affair but it has come to an end. The LG G2 flagship is upon us here in New York city and it brings a ton of innovation in one of the most compact over-5″ bodies out there on the market.

The LG G2 comes with an almost bezel-less 5.2″ FullHD display in a body not much bigger than the one on the Galaxy S4. It gets even more interesting when we get to the camera. It’s a 13 MP unit and it offers optical image stabilization in order to minimize blur and allow higher shooting speeds under unfavorable light.

The LG G2 comes to tackle the competition, especially devices like the Samsung Galaxy S4 and HTC One with a larger screen, more potent chipset, superior camera (on paper), bigger battery, etc. 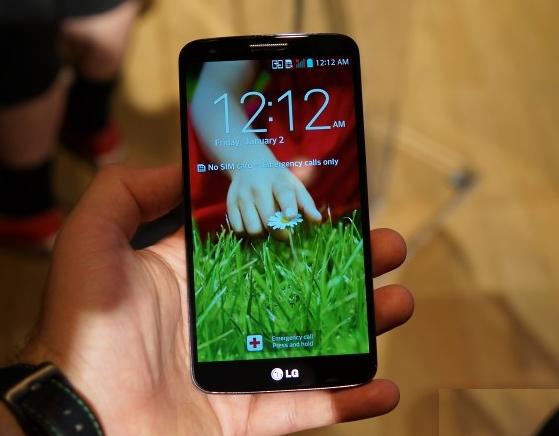 Take a look at what the LG G2 has to offer.

LG G2 at a glance

LG purposefully teased the LG G2 relentlessly over the past couple of weeks and it managed to build up the hype, leading to today’s event but this move also obliterated any mystery that could have surrounded the just announced flagship.

It’s clear that LG will be going for the crown with the LG G2. It waited enough so it can release it as an unmatched contender in regards to its size to power ratio and seems to have put a lot of effort into differentiating it.

The LG G2 design language is pretty much the same as what we already saw in the company’s phablet flagship, the LG Optimus G Pro. There are a few notable improvements though – the G2 has an incredibly thin screen bezel and lacks any hardware buttons below the screen. This way LG G2 is probably the smartphone with one of the highest screen to body ratios, its IPS display occupying almost the entire front.

LG G2 is built around a 5.2″ True HD-IPS Plus display of 1080p resolution. According to the company this is the largest a smartphone can get, while still being manageable with one hand. We did try and verify their words and we found there’s some truth to them. It’s not the most comfortable experience but the G2 can certainly be operated with one hand. The innovative unlocking gesture helps a great deal, too.

As for the image quality – it’s pretty much as good as on the LG Optimus G Pro,. Because of its smaller size, the display offers 424 pixel per inch ratio, so you everything is perfectly crisp (not that it was bad before). Colors are vibrant and punchy, while contrast and viewing angles are great. LG says the G2 display is a very energy efficient and offers 450 nits of brightness.

Since there is no Lock/Unlock key, LG came up with something we’ve already seen on some Nokia Asha phones and N9. A double tap on the screen will wake the phone up and another double tap on an empty space will put it back to sleep. In case you don’t like operating this way, you can configure the QuickMemo key to act as a Lock/Unlock hardware key. We’ve seen the LG reps using it this way and it’s really handy.

It’s also worth mentioning that the middle key at the back also doubles as Power on/off key when you hold it down for a few seconds.

Finally, LG incorporated the so-called Guest Mode. When you unlock the screen with a specific pattern (G letter by default), you’ll unlock the G2 into another account which you can configure to be used by guests, friends or kids. It’s a very clever idea, indeed.

Besides the lively and huge IPS display, the G2 front panel accommodates the earpiece, the 2.1 MP secondary camera, capable of 1080p video capture and the proximity sensor.

The right side of the LG G2 is completely bare, while the left one has the lonely micro-SIM bed.The top of the G2 houses the secondary mic and the infrared sensor, while the bottom has the primary microphone, the loudspeaker, the 3.5mm audio jack and the microUSB port. The G2’s connectivity port supports USB on-the-go and USB host.