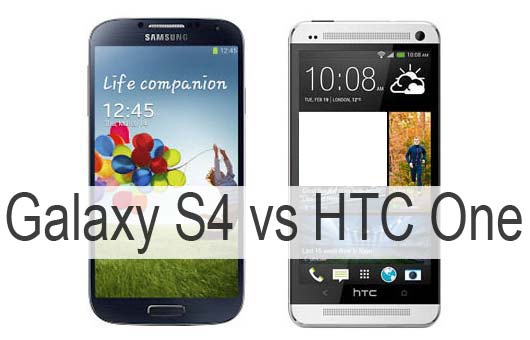 While Galaxy S4 comes with a plastic body, HTC One has the Aluminium body. It takes 150 minutes to make one HTC One Smartphone, all thanks to the engineering marvel. It is crafted with round cornered edges, full body made of Duralumin makes HTC One a worthy device. So, as of now, HTC One wins the race in terms of build quality & looks.

The Galaxy S4 comes with a 4.99” Super AMOLED touchscreen while HTC has got a Super LCD3 capacitive touchscreen. While HTC One comes with the Quad-core 1.7GHz Krait 300 processor, S4 on the other side has a Quad core 1.8GHz processor with Exynos 5 Octa 5410 chipset. Clearly, S4 stands a bit (not much difference though) higher in hardware specs compared to HTC one.

HTC One comes with an internal memory of 32/64GB while Galaxy SIV comes in 3 different options – 16/32/64GB options. HTC One & S4 both got 2GB of RAM. Interestingly, HTC one doesn’t have the external memory card slot while S4 has. Obviously, S4 wins the race in this section.

There is a 2600Mah battery equipped with Samsung Galaxy S4 and HTC One has got just 2330 Mah one. Both the android phone batteries will drain quickly but considering the specs, the S4 has a little advantage over HTC in this section.

Comparison of Galaxy S4 and HTC One Specs in Tabular Format

Comparing all the features provided by both Samsung Galaxy S4 and HTC One, I’d recommend Galaxy SIV over HTC One. Rest is your decision depending on the budget & views.