New Delhi: Unveiled at MWC 2013, Asus has finally launched the much-awaited Asus Fonepad in India at a price of Rs 15,999. We got to play with a unit for a week before the launch and weren’t disappointed.

The device comes in two colours and our review unit was Titanium Gray. Fonepad – as the name itself suggests – includes calling capabilities and is not to be confused with the Asus PadFone. This 7-inch tablet incorporates 3G mobile data with full telephony support. The advantage of having 3G support is that a user does not have to look for a WiFi network; in fact he can have access to the Internet from anywhere. But to making and receiving phone calls with a tablet is indeed a little odd and you can notice people around smirking. I was definitely not comfortable using this as a giant phone.

The tablet has been smartly and beautifully designed. On the front is a 7-inch display with a black bezel around it. The tablet has a metal back and has been sprucely fabricated, which makes it first of its kind. Neatly tailored, much of the functionalities are hidden away out of the sight. The rear has a removable small plastic panel, hidden underneath are the SIM card and microSD card slots. The idea to conceal both slots inside the body of the device makes the exterior lines look neat. The sides of the tablet have a wedge-shaped design, which makes it comfortable to hold. The build quality is good.

The Asus Fonepad features a 7-inch WXGA display with a resolution of 1280×800 pixels. Weighing 340g, the tablet is moderately light in weight. The display produces good colours and the text looks crisp on the screen. One could comfortably read e-books the device. At full brightness, I could easily view content in bright daylight.

Though the screen is not scratch-resistant, but in a week’s time I could barely notice any scratches. It has an LED IPS panel that offers wide viewing angles. Viewing angles are solid. The device has a responsive touchscreen and navigating the tablet was smooth. 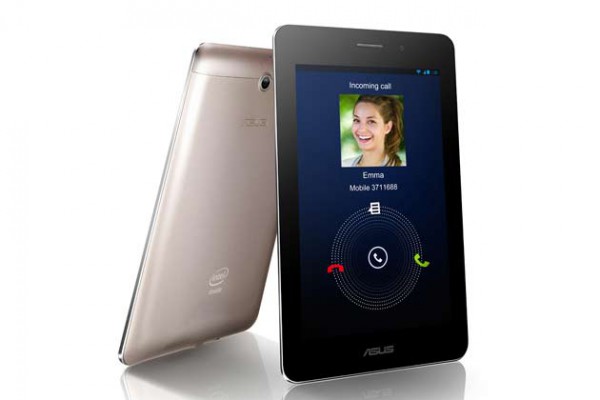 The tablet comes with two cameras – a 3 megapixel rear camera with autofocus and a 1.2 megapixel front camera. Both cameras capture impressive photos in good lighting conditions, while in low-lighting conditions, they, expectedly, failed to impress and captured grainy images. The front camera is good for video calling. In video mode, the rear camera allows you to record the 720p videos. It can capture quality videos in favourable light conditions.

This Fonepad has a powerful battery under the hood. I used the tablet as my primary device – made calls, surfed the internet, listened to music, watched videos and performed other functions. On normal usage, I could easily use the full-charged tablet for over 1.5 days. Its 4270 mAh Li-Polymer Cell battery takes around 4.5 hours to get fully charged. While the battery is exceptionally good, the tablet has a below average speaker; it’s is a letdown. The speaker is not loud, and in noisy areas it is very difficult to hear the sound it produces. Most of the times, I missed my calls because I could not hear when it was ringing. However, I did not face any dropped calls. The call quality is good. But where there is silence, the sound produced can be somewhat heard. With earphones, the loudness is decent.

The Fonepad comes engineered with an Intel Atom Z2420 processor clocked at 1.2GHz and 1GB RAM. I could easily multitask and run scores of apps at a time, but the tablet fell back while playing games with heavy graphics. Even playing ‘Temple Run’ on the device was not a good experience. The tablet supports 1080p videos and the videos I watched played smoothly and didn’t experience any lags.

At the heart of this tablet is Android 4.1 Jelly Bean OS. It comes with an internal storage of 8GB, of which only 4.39 GB is user-accessible. However, it allows you expand the memory up to 32GB via the microSD card slot.

Given its price, the tablet is feature-rich, but the only thing that restricts me from suggesting you its bad speaker. But if you can snub the bad quality of the speaker and are not an avid gamer, then it is definitely a device that you can consider.