Turn your Windows 8 PC into a Wi-Fi Hot Spot 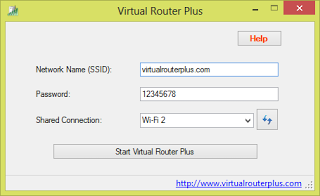 Microsoft quietly removed one of the most useful networking feature ‘ad-hoc networks’ in its Windows 8 OS. This special ad-hoc feature in Windows 7 will turn your PC into a Wi-Fi hot spot, allowing it to share its Internet connection with other devices via Wi-Fi.

Of-course, you can do the same in Windows 8, but the inbuilt feature requires some tweaking using the command prompt. However, there is a free, open-source program called ‘Virtual Router Plus’ that does all the geeky part for you.

The program requires no installation and it will simply launch when clicked. All you need to do is download it, extract and launch the .exe file inside the folder.

You should now be able to see the SSID on your mobile or other devices when Wi-Fi is turned on. In case you’re not able to see it, then simply redo the process (close and launch it again).

ad-hoc networks settings in its Windows 8 OS enabling ad-hoc network in windows 8 How to Share Internet Connection Over Wi-Fi in Windows 8 Turn your Windows 8 PC into a Wi-Fi Hot Spot 2013-04-10
admin
Previous: HTC One Vs Samsung Galaxy S4 Comparison
Next: Best Music Player Apps for Android