Looks like LG is adding more and more goodies in its bag before MWC 2015 starts. The company pre-announced its stylish LG Watch Urbane Android Wear smartwatch and now it has revealed another variant to it, known as LG G Watch Urbane LTE. 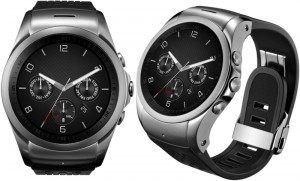 The G Watch Urbane LTE features a 1.3-inch P-OLED Display with 320 x 320 pixels resolution. Similar to the G Watch Urbane, It also has a metal body, but it runs on LG’s in-house wearable platform with new UX rather than Android Wear. It will also work with Android smartphones running Android 4.4 KitKat and above. The watch comes with voLTE voice calling support, in addition, it also has a speaker and a microphone along with NFC support to enable easy payments.
Other specifications are somewhat similar to the G Watch R and the Watch Urbane. It is powered by a 1.2GHz Snapdragon 400 SoC, 4GB internal storage and dust and water resistance with IP67 ratings. The latest variant, however, has spiked up specs such as, it features 1GB RAM and is backed by a larger 700mAh battery for better talk time. The watch also has supports voice chats (walkie-talkie style) along with built-in GPS support. There are three buttons on the side (next to the crown) of the watch unlike the Watch Urbane, which had only one. The three buttons on the side will help in quick navigation and device settings.

The LG Watch Urbane LTE will be available in polished silver finish. It will be showcased along with the Watch Urbane at the MWC 2015 next week. LG has not revealed the pricing and availability details yet.