The Android masses are getting younger – the OS versions we mean. In the month of July, v4.1 Jelly Bean has at long last dethroned Gingerbread as the single most popular Android OS release. In June Jelly Bean beat Gingerbread, but that was only if you added the two JB branches (4.1 and 4.2).

Basically what happened in July was Ice Cream Sandwich, Gingerbread and the older versions combined shed about a percentage each, to the benefit of Jelly Bean 4.1 and 4.2. The newest version, Jelly Bean 4.3 has yet to make a mark but it was only announced at the end of July. Still, with the Nexus 7 2 launching immediately with the announcement, v4.3 will probably have something to show next month. 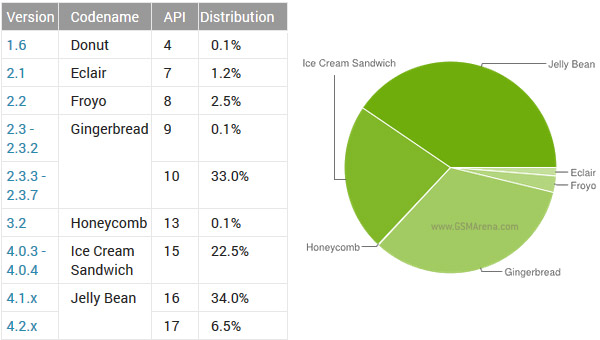 The adoption of Jelly Bean 4.2 seems to be slowing a bit though. In May it was 4%, then jumped to 5.6% in June and now it’s at 6.5%. It will probably climb higher as makers push out their 4.2 updates, but with 4.3 already on the roadmaps it probably won’t get very high.

There’s a lot of talk of Android fragmentation, but with Google slowing down the release schedule (4.3 was supposed to be out months ago at I/O) and pushing out only relatively small updates (which will allow makers to catch up quicker), we might be seeing the beginning of Android’s unification.

Note that Google is not slowing down the release of new features, the company is just doing it through apps. Google recently moved the malicious app scanning function to the Play Store app so that even Gingerbread devices can use it, the Play Games is an app, not a native OS feature and so on.