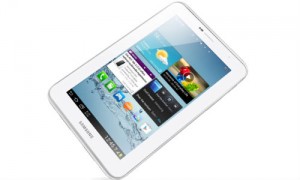 Of course, tech enthusiasts are keeping their fingers crossed in hope that Samsung has more tricks up its sleeve for MWC 2013. However, here is another good news from the South Korean tech giant for all the Samsung tablet lovers in India. The company has announced the launch of new Samsung Tab 2 311 tablet in the nation and the new device definitely seems to be worth a gaze!

Confirmed to be priced at Rs 13,900, Samsung Tab 2 311 is already up for pre order on the company’s officiale-store and will be released in the market in the first week of February 2013.

Released back in MWC 2012, as Samsung Galaxy Tab 2 7.0 , the Indian variant of the tablet, that is Tab 2 311 features 7 inch Super PLS LCD display of 1024 × 600 pixels, 1GHz dual-core processor, 3MP camera to record 720p HD videos, front-facing 0.3MP VGA shooter, microSD card slot for memory expansion up to 32GB, perform video calls and more. But the upgraded part of the tablet is instead of running Android 4.0.3 Ice Cream Sandwich OS, the latest variant will hit the market with Google’s latest Android 4.1 Jelly Bean operating system slapped on it along with TouchWiz UX UI.

Further, Samsung Tab 2 311 is a Wi-Fi only tablet and would not come with 3G SIM support for calling and rest. But unquestionably, it seems the South Korean manufacturer has launched the special edition to challenge the cheapest and the greatest Asus-made Google Nexus 7 tablet in the 7 inch premium tablet market category. Meanwhile, those interested to buy, the tablet will be available in white and black color variant.

Let us know ins comment, will you consider buying the new Samsung Tab 2 311?