We were fairly impressed with the Dell Venue 7 and Venue 8 which we reviewed almost exactly a year ago. Dell has only just decided to get serious about the Android tablet world, and despite some flaws, the first two Venue models were pretty good for their asking prices. In the time since then, Dell has launched an updated model in India. These were first shown off at Computex 2014, and are currently available in our market. 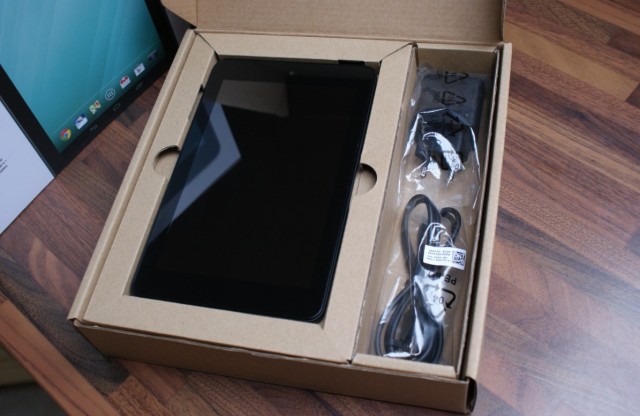 The big new thing this time is the inclusion of voice calling. A lot of people feel that if you’re going to have a SIM card for cellular data, you might as well be able to make and receive voice calls. On the other hand, there’s the staggering impracticality of holding a 7-inch tablet up to your face or plugging in a headset every single time the phone rings. Dell has left the choice up to the buyer, and so versions of the 2014 Venue 7 (and Venue 8) with and without voice and data are available. We have the voice-enabled 2014 Dell Venue 7 in for review today.

Look and feel
This is a pretty slick-looking tablet. Its black plastic and rubber finish is definitely less premium than that of Apple’s iPad mini lineup, but at least you don’t require a protective case. The first thing you’ll notice is the bold concentric circle pattern on the back. It looks good and helps you grip the body even when using it with one hand – the only minor drawback is that particles of dust and lint tend to get trapped in the grooves. 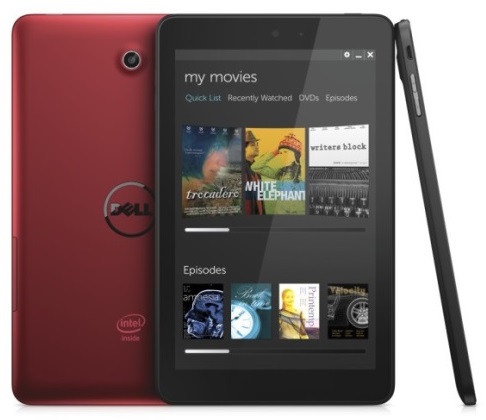 With the screen off, the front face is totally blank. The only thing helping you orient the tablet is a prominent cutout for the front-facing camera right in the centre above the screen. It’s worth noting that there is no earpiece on the front for making voice calls with, and no headset in the box either.

Android navigation buttons are all on-screen. The power button and headset socket are on top, with the Micro-USB port and volume buttons on the upper left. A fairly prominent speaker grille is on the bottom. The Micro-SIM and microSD card slots are hidden under a neat rubber flap on the right edge.

The primary camera, centered near the top of the rear panel, sits on a raised bump. This means that the tablet rocks a bit if you try using it when it’s lying on a table. Dell for some reason chose to print all its regulatory information on a black sticker on top of the grooved rear surface, which is the only thing that mars the Venue 7’s looks.

The device can’t be opened, but we did find a bit of flex in one corner where the rear shell curves around to meet the front face. The front face also picks up fingerprints and smudges like crazy.

Specifications and software
Dell has continued using Intel’s Atom CPUs in its tablets, and the new Venue 7 is powered by an Atom Z3460, which is a dual-core, 64-bit processor running at speeds between 1.06GHz and 1.60GHz. 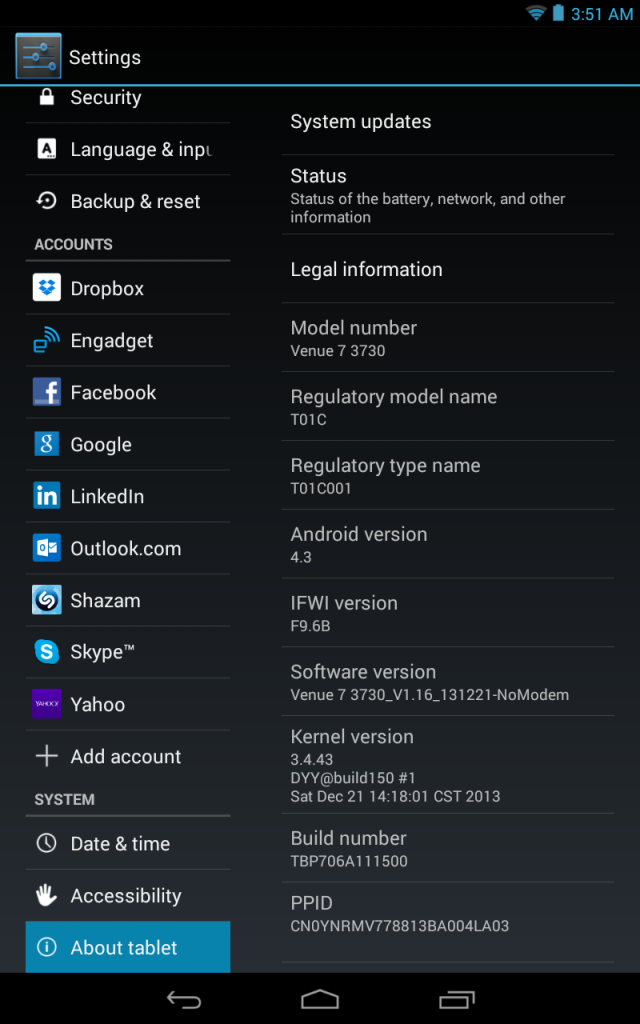 The screen still has a resolution of 800×1280, though part of it will almost always be occupied by a band for the soft navigation buttons. This isn’t the sharpest screen around, but it’s good enough for reading books, surfing the Web, playing games and watching videos on. The primary camera has a 5-megapixel sensor and no flash, while the one in front only has a 1-megapixel sensor.

Dell ships the Venue 7 (2014) with nearly-stock Android 4.4. It should feel familiar to anyone who has used an Android phone or tablet before, and in fact in some places, such as the black app drawer and camera app, it feels quite dated. There are a few customisations, most notably WavesAudio optimisation and its accompanying app. You can toggle between movie, music, voice and game modes using a widget in the notifications shade.

There’s also a card scanner and contacts syncing app calld CamCard, a photo editing app called Skitch, Dropbox, Polaris Office, Pocketcloud, and Dell Cast, which mirrors your tablet’s screen to an external one if you happen to have a compatible adapter.

Performance
The Dell Venue 7 (2014) performed quite well in all our benchmarks and we noticed a massive leap in performance between last year’s model and this one. The Quadrant score jumped from 7,698 to 10,338 and the AnTuTu score from 19,094 to 30,429 (though these scores aren’t entirely comparable as AnTuTu has been updated since then). The frame rate in GFXBench improved from 13fps to a very solid 32fps, and 3DMark’s Ice Storm Extreme rose from 3,643 to 8,935. SunSpider’s score improved slightly from 986ms to 958.1ms. It seems that Intel’s latest generation of Atom processors shows much greater improvement in the graphics subsystem than the CPU. 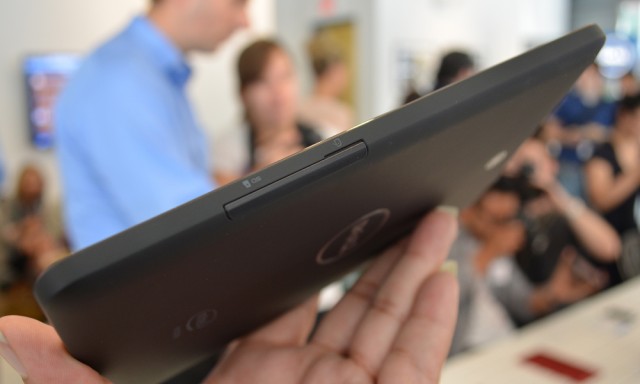 The screen was much improved, compared to last year’s model. Reading long documents did not pose any problem, and colours were generally vibrant except when the device was used under direct sunlight. The Venue 7 (2014) played our heaviest sample video clips without any trouble. The speaker is loud and mostly clear. Battery life was also impressive, with the device lasting 7 hours, 9 minutes in our video loop test.

We wouldn’t usually pick up a tablet when we need to take photos, but the Dell Venue 7 (2014) actually surprised us with decent image quality. Images were far more detailed than those taken with last year’s model. Even so, you’re more likely to get a better picture with a low-end smartphone camera, especially in low light.

Verdict
Although Dell happily sells the Venue 7 (2014) as a voice-enabled tablet, it really seems as though the company has treated calling as an afterthought. There are plenty of other 7-inch devices, such as Asus’ FonePad and Samsung’s Galaxy Tab series which are more suited for voice calling. At his price level even the first-generation Wi-Fi-only iPad mini is an alternative worth considering despite its age. 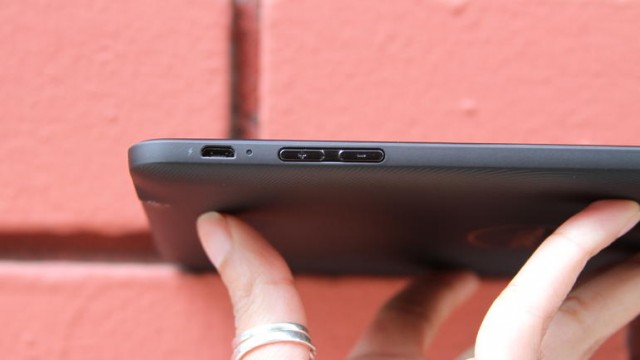 LTE data should have been this product’s biggest selling point, but that isn’t possible in India. Still, performance is pretty good, especially for casual games and Web surfing, and build quality far outshines that of similar products from smaller brands. As such, Rs. 14,999 seems like a little too much for this device. If you can live without cellular data, the Wi-Fi-only version offers better value at Rs. 11,999.